When American newlyweds Milena Basso and Gaetano Cerullo set out for their honeymoon, it should have been the trip of a lifetime.

But as the Wuhan coronavirus spread around the world, sickening more than 28,000 people and killing more than 560, the couple have found themselves quarantined on the Diamond Princess cruise ship off Japan for at least two weeks.

More than 7,300 people are being held on two cruise ships off Hong Kong and Japan amid concerns that those on board have been exposed to the virus. The Diamond Princess is anchored at Yokohama, near Tokyo, carrying 2,666 passengers, including 428 Americans, and 1,045 crew.

Three people from the US are among 20 confirmed cases of the virus on the vessel, according to statements by the cruise company.

Basso told CNN that she and her husband just don’t know how long that they’re going to be marooned on the ship, with thousands of other travelers.

People aboard both vessels are being screened, and those with suspicious symptoms are being tested for the virus that has quickly spread through mainland China and beyond.

“We just don’t feel like we’re safe,” Basso told CNN. “We should be quarantined in a sanitary environment that’s safe, not on a cruise ship that’s already infected,” she added. The couple saved for the honeymoon for two years, they told CNN.

Basso said they have been instructed not to leave their room, and that updates from officials have been “vague.” 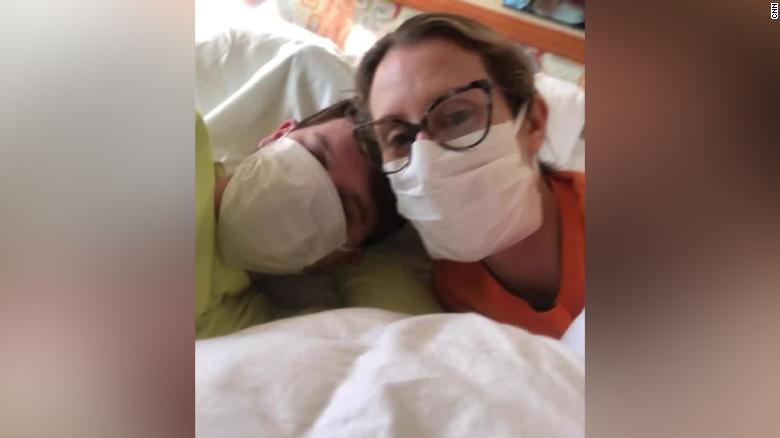 Basso has a clear message for American authorities. “Donald Trump save us,” she said. “Get us a government-based airplane. Get us off the ship,” she said.

The rest of the passengers on board will remain under quarantine for at least 14 days, “as required by the Ministry of Health,” the statement added.

‘Likely to spread more rapidly than on land’

Concerns about a potential infection among thousands of passengers at sea exposes the vulnerability of cruise ships to viral illnesses, like the coronavirus.

“Outbreaks of respiratory transmitted infections, especially Norovirus and influenza, occur quite often on cruise ships,” Paul Hunter, professor in Medicine at the UK’s University of East Anglia, said in statement. “Cruise passengers are often older than average and spend a lot of time indoors with other people who may have come from all over the world.

“If a passenger has the 2019 nCoV [as this coronavirus is officially known] then it is likely to spread more rapidly than on land and, given the relatively high age of many passengers, the probability of more severe disease is high in those affected,” he added.

The threat also raises questions about the durability of Asia’s booming leisure cruise industry, which counts the elderly as among its most loyal customers.

Spencer Fehrenbacher, who is also on board the Diamond Princess, said an announcement told passengers that the ship was working with Japanese health authorities to “provide masks for everyone on board in order to allow a certain number of guests to have access to the open air decks outside of their cabins.”

Passengers have stayed in their rooms, Fehrenbacher told CNN, adding that food and drinks are being served by crew members.

“For breakfast today, we were given two hardboiled eggs, a bowl of fruit with yogurt and granola drizzled on top, a muffin and a croissant,” Fehrenbacher said. “They also gave us a glass of orange juice and poured each person a cup of coffee.”

“We are now trying to spend our time reading, watching television and trying to stay generally positive,” he added.