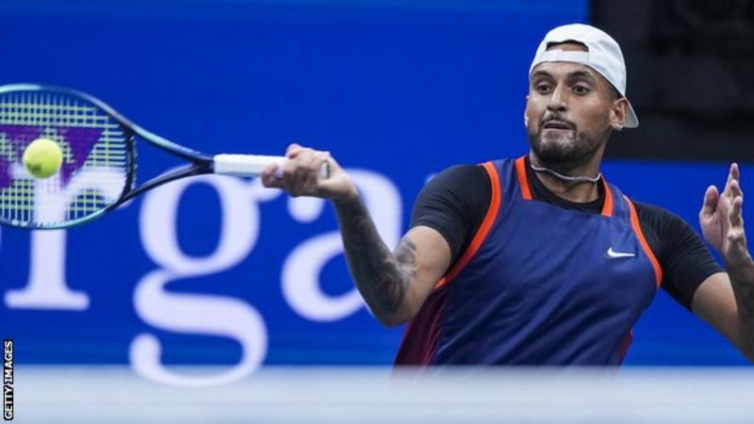 A “devastated” Nick Kyrgios is out of the US Open after eventually being out-battled by Russia’s Karen Khachanov in a tense quarter-final in New York.

“I feel like I’ve let so many people down,” said Kyrgios.

Kyrgios added: “I feel like these four tournaments are the only ones that ever are going to matter. It’s just like you’ve got to start it all again. I have to wait until the Australian Open.

“It’s just devastating, it’s heartbreaking. Not just for me, but for everyone that I know that wants me to win.

“But all credit to Karen. He’s a fighter. He’s a warrior.”

Khachanov, who lost out on a gold medal to Germany’s Alexander Zverev at Tokyo 2020, said: “It was a crazy match. I was expecting it would be like this. I’m ready to run, to fight to play five sets. We played almost four hours and that’s the only way to beat Nick.”

The Russian was defeated by Ruud in 2020 in their only previous meeting, but said he had “nothing to lose” in the semi-finals.

“I just want to go for it and be ready for the next match and hopefully it will be a good one.”

Rafael Nadal’s exit in the last 16 against American Frances Tiafoe on Monday means a first-time Grand Slam men’s singles champion will be crowned in New York on Sunday.

Khachanov, who trailed to Jack Draper in the third round before the Briton got injured – still has the chance to be that person after beating 23rd seed Kyrgios with a composed performance in which he saved seven of nine break points.

The world number 31 edged a tight opener when the first break point of the match went his way in the 12th game, with Kyrgios requiring treatment afterwards and saying he was struggling to walk.

But Kyrgios recovered and found top gear in the second set to level the match.

The Wimbledon runner-up continued to create chances in the third set, but grew frustrated when his forehand broke down in the ninth game and stopped him taking any of two break points.

After clattering his racquet on the court, Kyrgios was unable to forget the missed opportunities as he served.

He survived two set points in the 10th game – the first when Khachanov inexplicably whacked a poor drop-shot into the stands – but could not see off another in the 12th after the Russian’s relentless returning continued to draw out errors.

Kyrgios ranted angrily and smashed a water bottle, which seemingly helped him to mentally reset in the fourth set and take a slow-burning match into a decider with a composed tie-break.

Khachanov took Kyrgios’ serve in the first game of the fifth, superbly saved break points in his next two service games, and maintained a high level under serious pressure to clinch victory at 00:59 local time.

A furious Kyrgios destroyed two racquets before swiftly leaving court, with what seemed like a good chance of winning his first major left in tatters.

Ruud is aiming to achieve a notable double of winning his first major title and becoming the new world number one.

The 23-year-old, who was beaten by Nadal in this year’s French Open final, said having the top ranking on the line is providing “extra motivation” after he reached a first semi-final in New York.

Ruud must make the final to have a chance of pipping Nadal to top spot. If he was to meet Spain’s Carlos Alcaraz for the trophy, the winner would become world number one.

“I had no idea I could be number one when I started this tournament,” said Ruud. “It is something all young players think about.

“It’s a bit of extra motivation to dig in and keep fighting. If I am very lucky I can leave New York as world number one.

Under the roof on a wet New York day, Ruud got off to an electric start. He took the first set with ease, going up 5-1 in the second and eventually closing out after 2019 semi-finalist Berrettini fought back to 4-5.

The Italian, playing in his fifth consecutive Grand Slam quarter-final, broke early in the third set but failed to convert two set points at 5-2.

And Ruud broke back before forcing a tie-break, which he won in composed style to reach his second Grand Slam semi-final.

Berrettini, who has been hampered by injury and illness this season, was at a loss to explain his poor start to the match.

DISCLAIMER: The Views, Comments, Opinions, Contributions and Statements made by Readers and Contributors on this platform do not necessarily represent the views or policy of Multimedia Group Limited.
Tags:
US Open