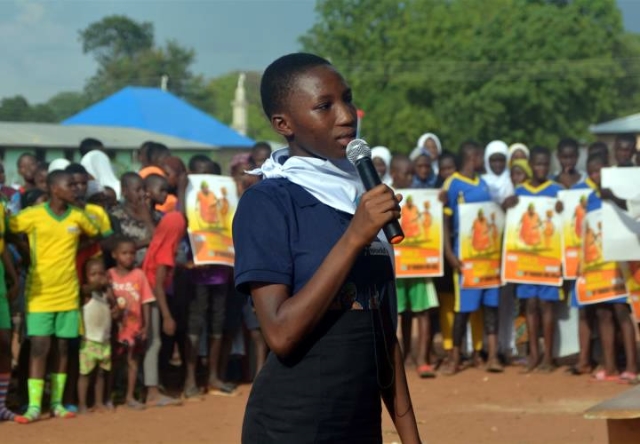 Child marriage figures in Ghana, especially in the northern part of the country, are depressing. According to the Unicef, in Ghana, 1 in 4 women married before the age of 18.

Mirroring the seriousness of the phenomenon in sub-Saharan Africa, studies show that child marriage in Ghana has increased nationwide from 25.9% in 2006 to 27% in 2011. The Upper East Region has the highest child marriage rate of 39.2%.

But one teenage girl, 16-year-old Sarafina Aakisichab, is determined to fight this profound manifestation of gender inequality.

How? Sarafina is not only an ‘End Child Marriage Ambassador’ who is campaigning against the widespread but illegal practice one step at a time. She is also the Speaker of the Child Parliament at the Tamale Senior High School.

Recently, Sarafina received resounding applause at the European Development Day in Brussels, Belgium, after a spirited speech on the effects of violence, especially child marriage, on young girls.

The crux of her speech at the Brussels event was a call on governments all over the world to intensify efforts aimed at ending all forms of abuse against children.

”I have become interested in the issue of child marriage because I have seen that child marriage is the leading cause of violence in Ghana and it is also very rampant in my community [Tamale]. If we as children do not raise our voice to create awareness for the adults to know that we don’t really like what is happening to us, then they will take it for granted and it will continue forever,” Sarafina justified her campaign on the AM Show on MultiTV, Monday.

However, when she is not giving vivacious, call-to-action speeches at such global fora, Sarafina’s task as the Speaker of the Child Parliament enables her to rally her teenage colleagues around for discussions on the myriad of issues affecting children.

The Child Parliament is an initiative of World Vision, an NGO that champions children’s rights. The NGO has been supporting young girls to be at the forefront of the fight against child marriage and other forms of abuse against children.

As child parliamentarians, Sarafina and her colleagues also educate parents on the importance of keeping their girl child in school instead of giving them out for marriage.

They also investigate cases of child marriage, warn the perpetrators and subsequently refer any such case to the Social Welfare Department for action. That is bold!

When she was hosted on the AM Show on the back of her thought-provoking delivery at the European Development Day, Sarafina Aakisichab did not only demonstrate her profound dedication to promoting girl’s rights in general, but she also revealed a strategic plan to help deprived children in Ghana.

“But let’s say I am a Lawyer. Yes, I will talk about their rights alright and I can sue all those that are those violating the rights of children. But what if on my way going I see a child who is seriously sick on the road. I would have to carry the child to the hospital. And in the process, the child might lose their life so for whom then am I suing those violating the rights of children?”

Watch more from the AM Show in the video below.