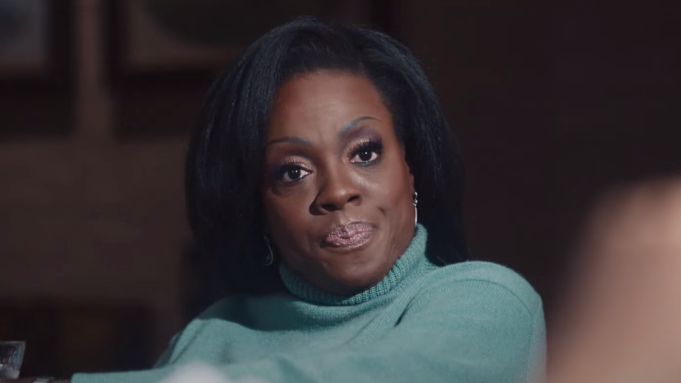 “In four years, I want to look back and think, ‘What did I become living in that house?’ ” Michelle says. Meanwhile, O-T Fagbenle’s Barack Obama adds, “I can’t have you backseat driving.”

The trailer also features Michelle Pfeiffer’s Betty Ford and Gillian Anderson’s Eleanor Roosevelt. “I’ll be here for you,” Betty tells her husband in the video. “But I’m going to be myself.”

“They can kick me out, but they can’t make me somebody I’m not,” she adds later on.

Also starring on the 10-episode drama are supporting actors Kiefer Sutherland as Franklin D. Roosevelt and Aaron Eckhart as Gerald Ford. Guest stars also include Dakota Fanning, Judy Greer, Ellen Burstyn and Kate Mulgrew as they will fill the shoes of some of U.S. history’s major players.

“The First Lady” is described as “a revelatory reframing of American leadership, told through the lens of the women at the heart of the White House.”

Showtime also adds, “The series will peel back the curtain on the personal and political lives of three unique, enigmatic women and their families, tracing their journeys to Washington, dipping into their pasts and following them beyond the White House into their greatest moments.”

Produced for Showtime by Lionsgate Television, the series is created by Aaron Cooley. by Oscar winner Cathy Schulman (“Crash“) executive produces while also serving as showrunner. Oscar and Emmy winner Susanne Bier (“The Undoing“) executive produces and directs all of season 1.

“The First Lady” is set to premiere on Showtime beginning on April 17.

DISCLAIMER: The Views, Comments, Opinions, Contributions and Statements made by Readers and Contributors on this platform do not necessarily represent the views or policy of Multimedia Group Limited.
Tags:
Michelle Obama
The First Lady
Viola Davis