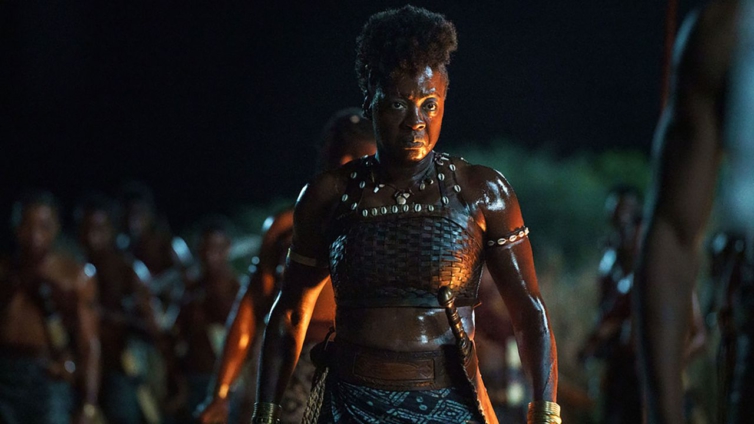 Viola Davis stars as the warrior leader in 'The Woman King.'

Although “inspired by true events,” “The Woman King” clearly isn’t tethered to them, using the underlying story of 19th-century female warriors in an African kingdom as the jumping-off point for a rousing action vehicle, augmented by plenty of melodrama.

That combination yields a strong showcase for the stars, featuring a cast and backdrop that serves to refresh its old-school formula.

Regal as always, Viola Davis provides the movie with its rock-solid core as General Nanisca, the leader of the Agojie, known as the Dahomey Amazons, a unit of women who swear off marriage and motherhood to pursue martial arts and defend the kingdom.

It’s an egalitarian streak within a society where the king (John Boyega) still possesses a sprawling harem.

The point of entry into this warrior culture comes by way of Nawi (“The Underground Railroad’s” Thuso Mbedu, with another mighty performance against a vast canvas), an independent-minded, headstrong young woman who refuses to marry for money, finally prompting her frustrated father to drop her off at the palace.

There, she’s taken under the wing of Izogie (Lashana Lynch, adding to an action resume that includes “Captain Marvel” and “No Time to Die”), and trained to undergo the brutal regimen that will eventually admit her into this corps of elite troops.

The boot camp that follows – which will surely serve as a source of inspiration for modern-day workout programs – proceeds in concert with preparation for potential war against a rival kingdom, the Oyo Empire, that has extorted tribute from the Dahomey for years.

Nanisca, meanwhile, urges the king to depart from his participation in the slave trade, arguing that selling captured foes to the Europeans has created “a dark circle” as they increasingly intrude upon their lands.

Directed by Gina Prince-Bythewood (“Love & Basketball”), the sweeping contours of the story are, quite simply, a lot to digest, especially with the various subplots and Nanisca’s back story that gets tossed into the mix. (The script is by Dana Stevens, who shares story credit with actor Maria Bello.)

Shot in South Africa, the film helps bridge some of the expository gap by opening with a brutal action sequence, demonstrating just how fierce Nanisca and her loyal soldiers can be. It’s the first of several such encounters, and although the scenes are carefully shot to mitigate gore, the level of violence and form of warfare are such that the PG-13 rating seems questionably generous.

Nanisca worries that her warriors “do not know an evil is coming,” a tease for the pending battle against the Oyo. But “The Woman King” perhaps excels most in portraying this fascinating subculture given the time and place, playing like a celebration of African traditions while incorporating a decidedly modern tone, and still servicing the escapist demands of a Friday-night audience.

Prince-Bythewood has accomplished that last goal with brisk pacing and the sheer muscularity of the exercise, with a significant assist from Terence Blanchard’s epic score. With its heavily female and almost entirely Black cast, the movie could give a welcome boost to other projects that have historically struggled in terms of studio support.

Somehow, the film manages to feel like a throwback to the action movies of old while featuring people who were seldom allowed to occupy prominent roles back then. If the finish is a bit too busy to be as rousing as intended, by then, “The Woman King” has made the most of its formidable arsenal.

DISCLAIMER: The Views, Comments, Opinions, Contributions and Statements made by Readers and Contributors on this platform do not necessarily represent the views or policy of Multimedia Group Limited.
Tags:
Female warriors
The Woman King
Viola Davis