We respect Ghana, but not too much: Egypt coach Bradley 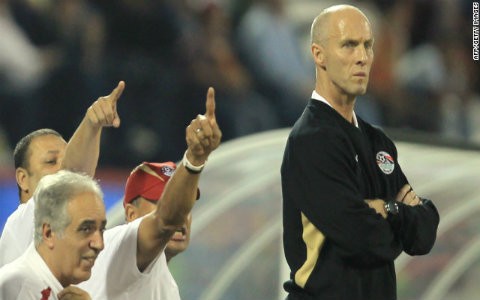 American manager Bob Bradley has expressed confidence and enthusiasm in the Egyptian team ahead of the first leg of the World Cup play-off against Ghana, Tuesday, in Kumasi.

"We did a lot of work. We studied Ghana well; we respect them, but not too much. We are a good team," the 55 year-old tactician said during a press conference held Wednesday at the re-commencing of the Pharaohs' preparations camp.

"We must be smart in Kumasi. We need to play with the right mentality; intellectually but with confidence."

"The players are the ones who deserve all the credit because of their concentration during the group stage [in which Egypt got full marks to top group G]," the former United States coach added.

The winners of seven African Cup of Nations titles, who are bidding for their first qualification ticket since 1990, are scheduled to play the second leg at the Cairo stadium on 19 November.

However, Ghana launched a request Tuesday to FIFA to move the game to a neutral venue due to security concerns.

"I hope we can play in Cairo, as it will be my first match there. We play in many places without fans, but this match will be special," Bradley said.

He also spoke about key players praising duo Mohamed Salah and Abou-Treika for their team work on the field.

"The return of Ahly players to the camp after a positive draw away in the CAF Champions League semi-final lifted the spirit of the camp. They returned with high morale."

Bradley praised goalkeeper Sherif Ekrami, giving him credit for winning in previous games. He defended his squad, saying they are at their fittest, adding that he has combined young and experienced players for variety in each position.

He also commented on the Black stars' big names, including Michael Essien and Sulley Muntari, saying, "We respect them, but not too much."

The Pharaohs skipper, defender Wael Gomaa, also spoke during the press conference, saying: "We promise all Egyptians that we will do our best to go to Brazil, especially following our good results in the previous round. We respect their players, but we are determined to win."

"In Egypt, everyone speaks about their World Cup dream, regardless of their political background. Qualification could indicate that the country is moving forward," Bradley concluded.