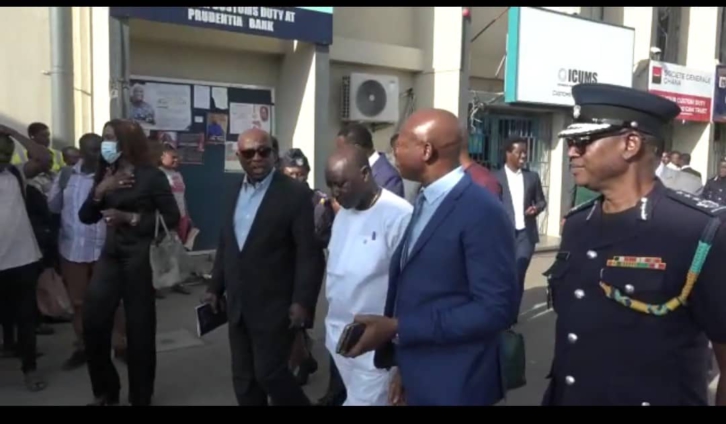 Mr. Ofori-Atta with Custom officials at the Tema Port

The Finance Minister, Ken Ofori-Atta, is optimistic the country will get approval from the International Monetary Fund (IMF) for an economic programme before the end of 2022.

According to him, a team of government officials will from this weekend travel to Washington, DC in USA for two weeks to continue negotiations with the Fund to fast-track the deal.

He was speaking to the media after paying a visit to the ‘Long Room’ at the Tema Port in the Greater Accra region.

He stated that discussions have so far been fruitful and cordial with the IMF mission team, here in Ghana.

“We will go to Washington [ DC] with them and continue for another two weeks of discussions. I think we are moving in the right direction. The Debt Sustainability Analysis still continues”, he announced.

Mr. Ofori-Atta pointed out that issues concerning the Debt Sustainability Analysis will be a key agenda that would be looked at to decide a programme for the country.

“The Debt Sustainability Analysis is a critical component of the decision as to what to do such as structural reforms and debt operations, as well as the financing gap of the country,” he stressed.

Mr. Ofori-Atta also used the occasion to congratulate the Customs Division of the Ghana Revenue Authority for exceeding its target in the month of September, 2022.

“A huge part of the discussions also include revenue. This means that the work of customs is very important to the discussions. I looked at September [2022] figures and it looks like we exceeded the target. That’s very encouraging,” he said.

He urged the GRA to continue working in the interest of the nation – blocking revenue leakages in the system.

DISCLAIMER: The Views, Comments, Opinions, Contributions and Statements made by Readers and Contributors on this platform do not necessarily represent the views or policy of Multimedia Group Limited.
Tags:
IMF
Ken Ofori-Atta
Tema Port