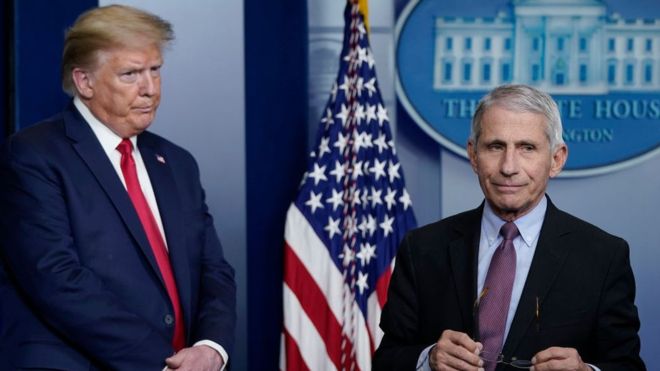 Three members of the White House coronavirus task force are self-isolating for two weeks after possible exposure to the illness.

Dr Anthony Fauci, who has become the public face of the fight against the virus in the US, is one of those who will go into quarantine.

His agency, the National Institute of Allergy and Infectious Diseases said he was at “relatively low risk” due to the degree of his exposure.

The 79-year-old will work from home for the time being and will be regularly tested, the institute said.

Her diagnosis came after a valet for US President Donald Trump was also confirmed to have the illness.

In a statement, the CDC said Dr Redfield, 68, had no symptoms and was not feeling unwell, but would also be teleworking for two weeks after “low risk exposure” to someone at the White House. It is unclear who this person is.

And an FDA spokesman told Reuters news agency on Friday that 60-year-old Stephen Hahn was also self-isolating. He has also tested negative, the spokesman said.

The three men were due to address a Senate committee on Tuesday.

Before the news about Dr Fauci became public, committee chairman Senator Lamar Alexander said Dr Redfield and Dr Hahn would be allowed to testify by videolink.

What’s the situation in the US?

According to Johns Hopkins University data, the US has 1.3 million confirmed cases and has recorded 78,794 deaths – by far the highest total in the world.

Many states brought in lockdown measures in March to try to contain the outbreak. But now some have lifted restrictions to allow people to return to work, a move health officials fear could further spread the virus.

Former US President Barack Obama has sharply criticised his successor’s response to the crisis. During a private phone call to former staffers, Mr Obama called the response “an absolute chaotic disaster”.

Last week Mr Trump said he would refocus the White House task force on kickstarting the US economy, a day after suggesting he would disband it.

DISCLAIMER: The Views, Comments, Opinions, Contributions and Statements made by Readers and Contributors on this platform do not necessarily represent the views or policy of Multimedia Group Limited.
Tags:
Coronavirus
Dr Anthony Fauci
White House