Who wins this year’s five-aside football gala at Hitz FM’s Rep Ur Jersey? 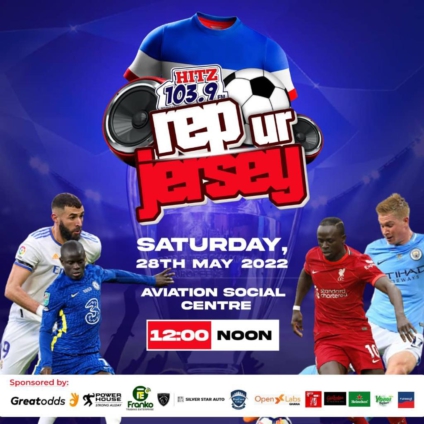 The battle lines have been drawn as teams face off to fight for the bragging rights for this year’s five-aside gala at Hitz FM’s ‘Rep Ur Jersey.’

Will it be the reigning champions from 2019, Dr Pounds and his team, or will we see another team take the ultimate trophy on the 28th of May at the Aviation Social Centre?

This year’s edition of ‘Rep Ur Jersey’ promises to bring you double energy as we bring back the five aside gala.

In the past 2 years, the tournament was brought to a pause because of the outbreak of the COVID-19 pandemic.

However, this year, you get to see your favourite presenters and their teams battle it out to find out who emerges as King of the five-aside gala.

A draw was held on Daybreak Hitz to find which teams will face each other to eventually find the two finalists on the day.

Dr Pounds and his “Dwɛtɛɛ FC” will face newcomers to the tournament, “Friends of Logic,” headed by the co-host of Matter Dey, Mr Logic.

The “Loyal Fans of Da Don,” headed by the host of “U Sey Weytin,” Prince Tsegah, face KMJ’s “Royal FC.”

This year’s edition of Hitz FM’s ‘Rep Ur Jersey’ will be massive and promises to leave patrons yearning for more.

There will so much fun activities like FIFA video game, ampe, basketball, long tennis and it will all be crowned by the final of the Champion’s league final between Liverpool and Real Madrid on a giant screen.

Hitz FM’s ‘Rep Ur Jersey’ is brought to by Hitz 103.9 FM, and powered by Joy Prime TV and Joy Sports.