‘Why Arsenal beat Man Utd but nobody really cares’

When I played for Manchester United, Arsenal was always our biggest game of the season – the build-up was electric and I felt as if I was going into battle against our greatest rivals.

In those days, between 1995 and 2005, it was often a title decider. Everything was completely different about Sunday's game at Emirates Stadium, and it summed up where both teams are at right now.

It was a match between the teams in fifth and sixth place in the Premier League but it felt more like it was ninth versus 10th, in one of those dead rubbers you get at the end of the season.

It was the first time Gunners boss Arsene Wenger has beaten him in a competitive game, at the 16th attempt and after 13 years of trying.

But watching Mourinho afterwards, it was probably the first time in about six months that I have seen him relaxed and smiling.

It was a game that was clearly a nuisance for him, sandwiched between the two legs of United's Europa League semi-final against Celta Vigo that he has made it obvious is his priority.

So, for United, Sunday was just a case of survival – to get off that pitch without getting any more injuries – or at least that was how it looked.

Arsenal were clearly short of confidence, and in a different way they were looking to survive the game too.

They eventually worked out that United were not at full strength and they might be able to win, but for most of the first half they looked nervous, as if they were thinking 'let's not lose and have more fans protests after the game'.

The Gunners might have got the three points but the way they did it did not make any sort of statement about how strong they are.

When I played for United against Arsenal, I always thought I was going into a situation that was totally out of my comfort zone.

It was a matter of life and death, or it felt like it anyway.

This time, Mourinho had been telling us for the past 10 days that his priority was the Celta Vigo tie.

That completely knocked the stuffing out of the build-up and the game matched it – it was completely flat.

I was watching it with former Arsenal defender Martin Keown in the Match of the Day 2 production office, and he agreed that the lack of atmosphere and intensity was the most disappointing thing. 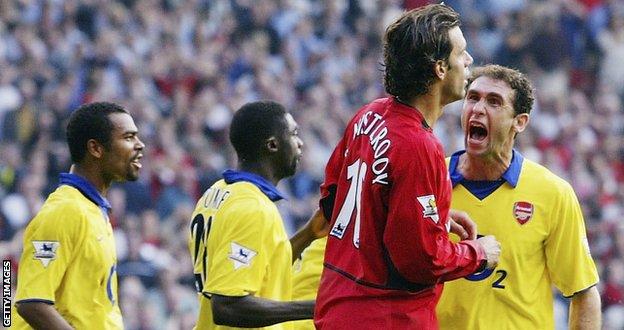 Even in the tunnel beforehand you saw everyone hugging and smiling, which would never have happened when Martin and I played.

Our teams were at each other's throats most of the time – literally on a few occasions.

There is a famous picture of me being throttled by Arsenal defender Lauren in September 2003 – in 'the battle of Old Trafford' – while a few weeks earlier in the Community Shield at the Millennium Stadium I was booked after only 27 seconds for a tackle on Patrick Vieira. 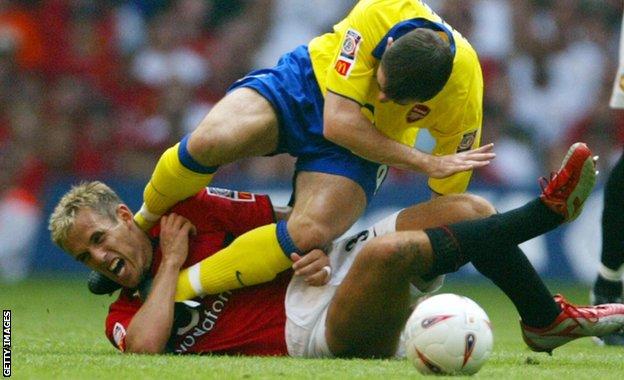 Sunday was a million miles away from that kind of occasion. I tweeted during the game that it was like a testimonial, and it was certainly played at that kind of pace – which is what you would expect from a pre-season friendly between two Premier League teams played in the United States.

It felt like a veterans game but if Martin and I were playing each other now, there would have been more sparks flying than there were at the Emirates.

United's eggs are all in one basket now – for them, making the Champions League is all about winning the Europa League.

It makes sense in lots of ways because, as well as looking like the easier route, it gets you straight into the group stage and you avoid starting the season early in the qualifying rounds, which you have to do if you finish fourth.

If they do win the Europa League, then I think Mourinho has had a brilliant season. If not, then that is when the criticism will probably come his way.

The pressure is on them for Thursday, when Celta Vigo come to Old Trafford, and it is a dangerous game to play, but I think Mourinho did the right thing with his team selection against the Gunners.

Some of the players he rested conserved energy and the ones who came back from injury have got some playing time under their belts, which bolsters the squad a little bit.

That sort of performance would not be acceptable from United in normal circumstances, and in general they need to improve when they go away to the top clubs.

Looking at their performances in their 0-0 draws at Liverpool in October and at Manchester City last month, they did not offer enough of an attacking threat.

I think United fans will expect far more in those games from the start of next season, especially because by then it will really be Mourinho's team. 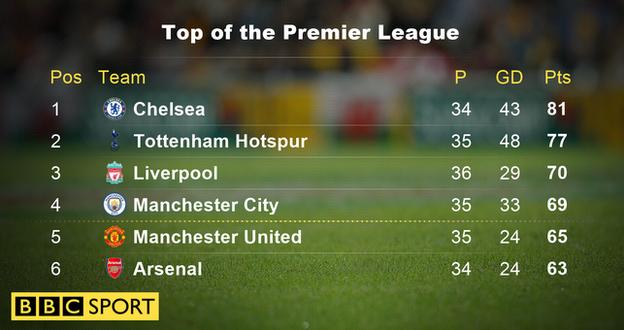 Arsenal have put themselves back in touch with the top four with Sunday's win but I don't think they will make it, from what I have seen of them recently.

I think there is a big job in store for whoever is the Gunners' manager next season, and that is the key issue when you talk about their future.

You cannot assess who Arsenal will buy in the summer until you know who is going to be in charge – if it is, say, Atletico Madrid boss Diego Simeone then it will be 10 warriors; if Wenger is still manager it will be 10 really nice and pretty footballers.

In contrast, with United, you can predict that Mourinho is going to grab hold of that squad and say to his players that if they are not mentally tough enough, they will be out of the door.

Three or four of the team that lost to Arsenal might not be at the club next season but you know there will be some big characters arriving in the dressing room.

Mourinho is building a team that he can go to war with, and it will not be long until these kind of games are back to being the big battles we all remember.