Why Samuel Takyi’s Olympics success must be celebrated 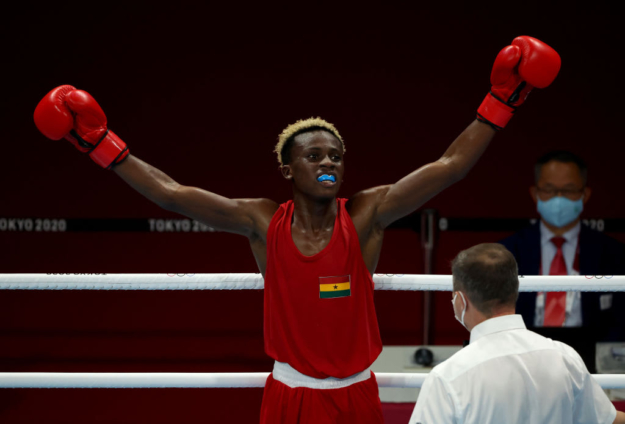 If joining the International Olympics Committee (IOC) President, Thomas Bach on stage in the closing ceremony of the world’s multi-sports festival is celebrating mediocrity, well, I, Nathaniel Attoh will celebrate the youngster, Samuel Takyi’s achievement any day because he has added one key medal to our existing four.

“The Golden Ring Warrior” has gone from unfancied selection on the Ghana team to featherweight podium glory, with more than 30 million people in his corner,” Olympics.com wrote.

“He joins the pantheon of Ghanaian Olympic boxing greats Clement Quartey, a light welterweight who won silver in Rome 1960, Eddie Blay a bronze light welterweight medallist from Tokyo 1964 and Prince Amartey who made history in Munch 1972,” they added.

If I, Nathanial Attoh celebrates mediocrity, then I have joined competition organisers to celebrate. If never knew, that the pedestal Takyi has gotten to.

Just in case we want to doubt the gallant nature of Takyi’s achievement, the President of Ghana Nana Akufo Addo has summed it all up in this message posted on his official facebook page.

“Big congratulations to Samuel Takyi from all of us at home, for hoisting the flag of Ghana at the Tokyo Olympics, and for winning a bronze medal, Ghana’s first Olympic medal in 29 years. Well done.”

Aside from this, the positively frenzied atmosphere that greeted his arrival at the Kotoka International Airport was an indication of the general appreciation by those who understand the worth of the achievement.

Clearly, the Olympics is not a place where Ghana has done greatly in terms of achievements. We don’t invest our resources in strategic preparation for the multi-sport event yet we always expect 100%.

In his last bout, Takyi fought against a Duke Ragan who is already a professional boxer with four bouts and his amateur record. Ragan has an amateur record of 63 wins and 22 losses and has fought in many competitions in destinations including the US, Peru, Germany and Poland.

Takyi doesn’t have Duke Ragans kind of experience. No he doesn’t!

Takyi has braved through all odds to get here. Let us wake up and start the process for the next OIympics today. The nations who top the medal tables only reap what they invest. I have covered Ghana’s Amateur boxing team, the Black Bombers for years.

This included when I wrote a feature on the team’s preparations for the 2007 Africa Games in very appalling conditions. They trained at Ghana National Fire Service Training School near Jamestown in an old building without a roof and windows and a bare concrete floor. There was not boxing ring neither was there any proper standard boxing equipment. The boxers has to resort to the usage of car tyres as punching bags.

The use of car tyres in place of proper punching bags is nothing new. In countries like Mexico car tyres are sometimes used for extra conditioning but this is after the right equipment which is the punching bag). They used sachet water purchased with the coach’s money for training. I got insulted by the then DG of the National Sports Authority for writing that feature.

The good side was that the feature I wrote in the Graphic Sports newspaper made an impact. A week after that the team, then Captained by Bastie Samir, was moved to the CK Gyamfi Sports College in Winneba. The current coach of the team, Ofori Asare, was then the assistant to Cuban, Roberto Ibanez Chavez. So we have seen all sorts of curves in this journey of trying to get things right.

Giving credit where it is due – GOC / Sports Ministry

It is also important to note the effort of the GOC through its President Ben Nunoo-Mensah, who collaborated well in getting the team to camp at least a month to the time in Japan. Through the resourcefulness of the GOC President some amounts in excess of $250,000 was raised from corporate Ghana for participation in Tokyo 2020. The Ministry of Youth and Sports and its overhead responsibility cannot be overlooked as well.

I do appreciate the fact that due to Covid-19 travel restrictions, it was relatively difficult for the Black Bombers to have training tours. So as a matter of policy, these training tours must be held frequently. The conversation about training tours also reminds me of some years ago when I used to cover the activities of the Greater Accra Amateur Boxing Assocation, then led by the late Gideon Quartey.

Under the leadership of Mr Quartey, a weekly boxing programme was successfully rolled out and also served as a nursing ground for many of the talents that made it into the national team. Due to the consistency, the Greater Accra team, established some strategic relationships one of which was with the Haringey Police Boxing Club of the UK.

During the first invitational tourney which Ghana hosted at the Prisons Canteen in Accra, I noticed that each boxer from Haringey Club had an average record of 50 fights compared to our most experienced boxers who had around 20.

This phenomenon still exists and the evidence was clearly shown when our boxers fought at Tokyo 2020.

For me the collaborative training camp between the Ghanaian team must be replicated for future events, because it’s always important to pit the team’s strength against others.

Taking advantage of the visit to the Presidency

Visits to the Flag Staff House, the seat of Ghana’s Presidency are rare for any sportsman or sporting association for that matter. This is the reason why the President of the Ghana Amateur Boxing Federation George Lamptey, when given the platform must advocate and appeal for extra resources to be channeled into the sport. There is enough evidence that there are talents scattered across the country and once a deliberate effort is made we can get there. In my personal experiences in the Northern parts of Ghana, a lot of technical help is needed to polish up the raw talents who clearly have good muscle bulk and stamina, yet lack the fundamental skills.

For now, the message from Takyi’s feat is very clear. We have the talent and we can only win the laurels when we discover, nurture and give consistent competitive opportunities both locally and internationally to these young ones. Paris 2024 looks like a distant date but could be with us in the twinkle of an eye. We either start planning now, or come back to sing the same choruses. For now, Takyi must be celebrated, monitored and given the needed support to get him up there.

DISCLAIMER: The Views, Comments, Opinions, Contributions and Statements made by Readers and Contributors on this platform do not necessarily represent the views or policy of Multimedia Group Limited.
Tags:
Samuel Takyi
Tokyo 2020 Olympic Games