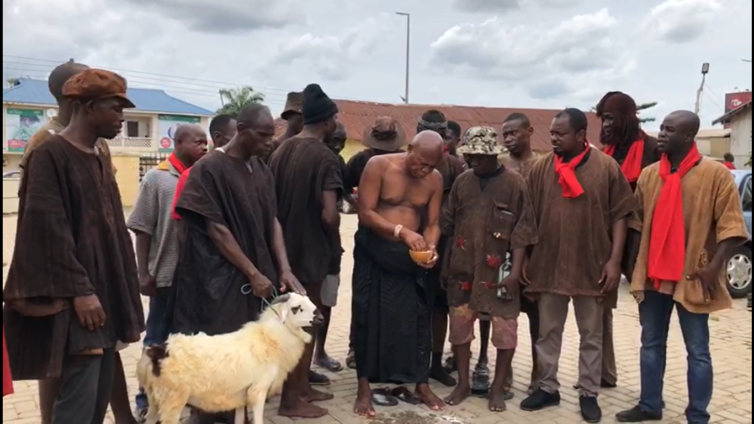 Some youth in the Asogli State in the Volta Region have initiated a series of spiritual exercises invoking their gods and deities to strike dead individuals behind the recent secessionist attacks in parts of the Region.

At a press briefing at the Asogli palace in Ho on Tuesday, the convener of the youth, Mutipha Fadebor condemned the attacks, noting that all Ghanaians must live in unity, particularly now, as the country prepares towards the general elections.

They are concerned that the activities of the separatist groups would negatively affect the overall development of the Region.

“We the Asogli Warriors, having analysed the negative impact these disturbances could have on our region as; eroding investor confidence, creating anxiety and insecurity, wastage of scarce national resources on maintenance of security, disruption in business and social activities and threats to disruption of voting in the Volta Region during forthcoming December 7th elections”.

As a result, Mr Fadebor on behalf of the group responded to the call by their traditional leaders to rise up and protect the residents of the Region and the nation as a whole.

“We, therefore, want to lend our fullest support to the call by our traditional leaders on the warriors to rise up and protect its citizens, to complement the efforts of the state security apparatus.”

“We have therefore initiated a series of spiritual exercises in readiness for the task ahead and we will invoke the gods and the spirits of our ancestors to strike any leader who is betraying the people of the Volta Region for his or her selfish gains,” he said.

The youth group also took the opportunity to express their “displeasure about verbal effusions and disrespect to our chiefs and the people of the Volta Region by leading political figures which have not been addressed by the appropriate authorities”.

They also shared their disappointment in the omission of the Volta Region in the national road development plan as well as the heavy presence of the military during the voters’ registration exercise.

“We are also frustrated by the following; the recent “mistaken” exclusion of the Region’s roads from the national budget, the invasion of our Region by the military and other security forces during the recent voter registration exercise under the guise of fighting Covid-19.”

He also extended an invitation to members of the Homeland Study Group which has recently distanced itself from the attacks to join the traditional authorities to fight off these ‘so-called’ freedom fighters.

DISCLAIMER: The Views, Comments, Opinions, Contributions and Statements made by Readers and Contributors on this platform do not necessarily represent the views or policy of Multimedia Group Limited.
Tags:
Asogli State Council
Volta Secessionist Group