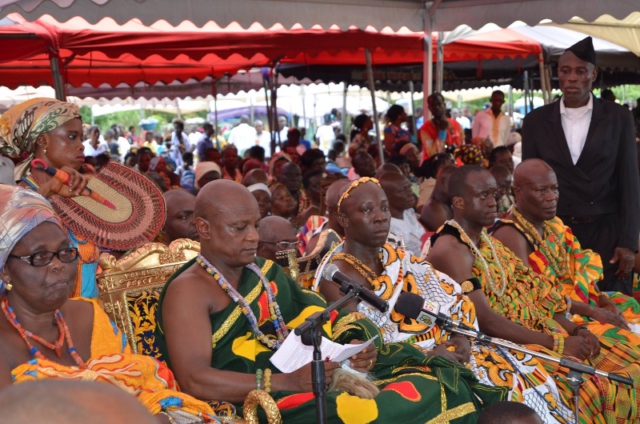 The Asogli State Council has expressed concerns over the alleged sale of lands in the Volta Regional Capital and called on stakeholders to investigate and correct the anomalies.

The Traditional Council, in a release signed by Stephen Tetteh, Secretary to the State made particular reference to an earlier release by one Emmanuel Adzome on behalf of the Ho Council of Electorates, raising concerns over the alleged sales.

Mr Adzome’s release, dated March 22, 2021, alleged that the State lands were being “shared to NPP Party apparatchiks” in Ho, and listed some party executives who had been allocated portions.

The Asogli State Secretary said the release confirmed the Council’s prior information, and thus was investigating the issue, which also affected lands belonging to stools and families.

“The Chiefs and people of Asogli State in the Volta Region take a very serious view of the press release on the above subject.

“We did receive complaints about the illegal sale of government lands to which various stools and families held allodia titles, before the publication of the press release, and had started our investigation on the matter.

“The contents of the press release are thus consistent with and confirm what we thought we knew all along. It is sad to imagine that people who have offered to lead us, will exploit the privileged positions and appropriate our lands among themselves and their cronies,” he stated.

The Secretary said the issue had been ongoing for about a decade, and that the Council had promised the needed cooperation on a thorough, unbiased investigation.

“We the chiefs of Asogli State hereby call for a thorough non-partisan investigation of the sale of government lands over the past ten years, and for steps to be taken to right any wrongs that have been committed.

“We wish to assure the government of our full cooperation, and look forward to being represented on any group that would be constituted to undertake the investigations,” he said.

The Regional Minister, Dr Archibald Yao Letsa refused comments, when contacted by the GNA, saying a stakeholder meeting would be held on the matter on Friday.

DISCLAIMER: The Views, Comments, Opinions, Contributions and Statements made by Readers and Contributors on this platform do not necessarily represent the views or policy of Multimedia Group Limited.
Tags:
Asogli State Council
Volta Region