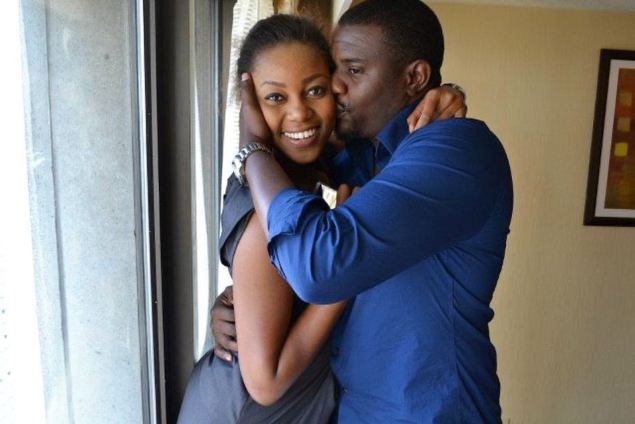 Actress Yvonne Nelson has gotten some Ghanaians questioning her recent posts on Twitter and the motives behind them.

In a series of tweets, the actress posted some pictures and a video she took with fellow actor John Dumelo years ago.

It is no secret that the two are friends, however, some people believe there might be more behind these posts.

Why? Because the actress, after each post, would add a heart emoji to them.

In one she wrote ‘JoVon’ a blend of both their first names John and Yvonne.

Most often than not, couples in movies who attract the attention of viewers are given a relationship name. In the TV series “The Originals”, the characters Klaus and Camille, who were madly in love with each other were given the ship-name “Klamille”.

When a couple is relation-shipped together, it signifies the strength of their relationship.

“Why does Yvonne Nelson keep posting kissing pictures of she and Dumelo? No respect for his marriage?(sic)” One Twitter user quizzed.

Meanwhile, some believe that the actress’ account might have been hacked especially since they view her posts as unusual.

Brooks, I was just about to tweet quite a similar opinion but I had to pulse and read yours…

Just imagine what his wife will have to go through if she has to see tweets/posts like this everyday from people who should know better.

Hope it a movie coming

Eii Yvonne Nelson ankasa she no know sey Dumelo be married mæn anaa? What she dey do nu no dey add up kraaa. She get something tell we anaa? @johndumelo bibiaa b)koorrr di3? #MegaTrendzGh pic.twitter.com/Bd8tIYQgAB

What is Yvonne Nelson doing, shaking up a marriage?

But the dude is married long time ago.. yvonne is just shaking up their marriage 😅

I don’t like this thing Yvonne Nelson is doing. How can you be fronting someone’s husband on your page for 3 days now?…

If the wife talk now, they will say she’s insecure.. This is wrong… pic.twitter.com/V7cutlVNl0

You see that Yvonne Nelson and John Dumelo bestie friendship,I don’t find it cute at all but disrespectful to John’s wife,they are too close for comfort abeg

Somehow I disagree tho… Like should political differences mess up friendship? She organized Dumsor virgil. John’s party was power. So what ? So if my friend’s party is in power I shouldn’t join any protest or speak against the party? That’s quite unfair you know

Oh naa, I didnt even expect him to condemn his own party. I just didnt think Yvonne Nelson holding a virgil against NDC should have messed up their friendship as long as Yvonne didnt attack John or mention his name.

Christ… Yvonne Nelson really said that to John ?? On social media? Never saw this. She really messed up then.

Chaaaaley🤣… You dey make me feel sad give madam sef. What could have been didnt be cos of Dumsor

Chaaaale, they allowed petty politics to break that beautiful friendship they had, they just couldn’t navigate around the whole thing well.

This her strategy issa no no

Is Yvonne Nelson doing something we all don’t know? There’s no smoke without fire. Maybe she and Dumelo know something we do not know.

Are going to mind our business about Yvonne Nelson ein things or we go talk am? Council for Mind Your Business we dey wait your verdict.

You see that Yvonne Nelson and John Dumelo bestie friendship,I don’t find it cute at all but disrespectful to John’s wife,they are too close for comfort abeg

His wife is not even complaining