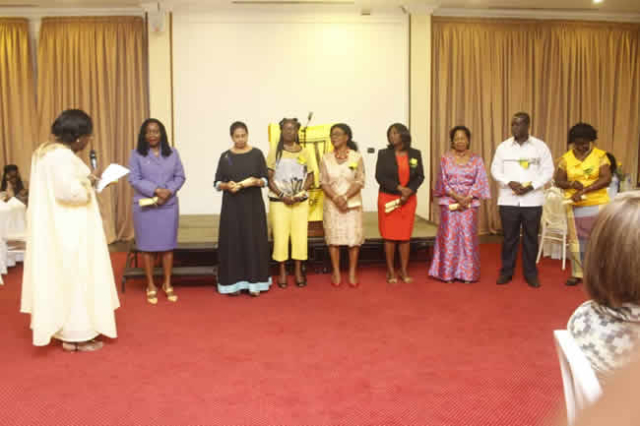 The Zonta Club of Accra, Africa’s premiere Club of Zonta International has inducted into office nine new officers for the 2019-2021 Biennium.

The swearing-in event which coincided with the Club’s fundraising dinner had as its Guest Speaker, Mrs. Norkor Duah, CEO of Lowe Lintas, an advertising and media agency.

Speaking on the theme, “Be the voice of the victim of child marriage”, Mrs. Duah recounted how 100 years ago, in November 1919, some concerned women professionals and business executives with a commitment to ensuring equal rights for women and girls, got together and chartered the first Zonta Club in Buffalo, New York.

She remarked that sadly, 100 years on, the Zonta world is still pressing for the rights of women in our societies.

According to her, the fact that we are still talking about discrimination and violence against women points to the fact that the voices of women are still not being heard.

Calling on Zontians therefore to stand up and be the voices of women in every society, she cited how with single voices, Malaya, the young Asian girl who is known for her human rights advocacy especially in the area of education and Greta Thunberg, the Swedish young girl who recently caused a stir with her worldwide campaign on climate change have used advocacy to call societies to action.

She noted that the core essence of Zonta as an organization is to be the voices of the marginalised including victims of early marriage.

She called on Zonta Clubs in Ghana to collectively agree on key strategies and use advocacy, education, engagement and partnerships to change the status of vulnerable women and girls and empower them to stand up for their rights.

The in-coming President of the Club, Mrs. Florence Ohene-Kyei, pledged her commitment to diligently serve the Club and use all available means to address some of the concerns of women and girls in our society.

Outlining her focus for the Biennium, she said, “For the next two years, Zonta Club of Accra, through the power of advocacy, will drive social change in our communities especially in locations with high incidence of child marriage.”

She added that the Club will build partnerships with NGOs, corporate bodies, international organisations, religious institutions and the media to create awareness.

Earlier in her welcome address, the out-going President of the Club, Mrs. Janet Tamaklo recounted some of the projects the Club undertook during the last two years.

She said the projects not only brought visibility to the work of Zonta but they also proved beneficial to the beneficiary communities.  She said the Club donated books and computers to deprived schools, initiated reproductive health awareness education programme among teenage girls in a cluster of schools at Abokobi, a suburb of Accra and medical equipment, among other things, to the Haatso Maternity Centre thus enabling the Centre to be opened for the first time since its construction, to expectant women in the community.

Zonta Club is a service organization of professionals working to empower women through service and advocacy.  Its areas of interest include improving the legal, political, economic, educational, health and professional status of women and girls worldwide.