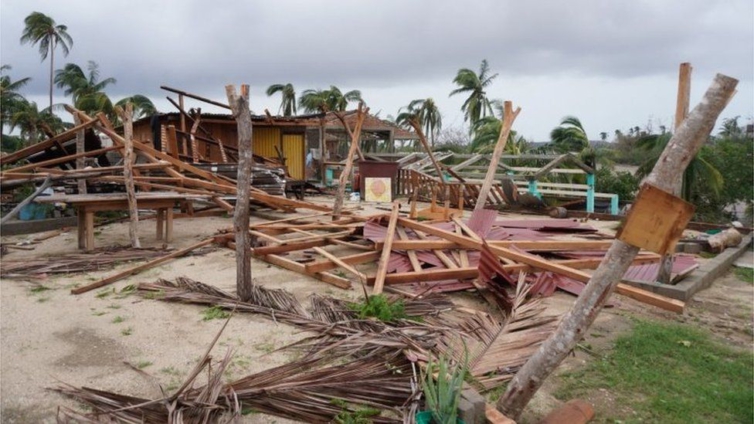 Eleven people are dead and more than 20 missing after Hurricane Agatha struck Oaxaca state in Mexico, the state’s governor says.

Agatha made landfall on Monday as a category two hurricane, the strongest to hit Mexico’s Pacific coast in the month of May since records began in 1949.

Most of the victims were swept away by rivers or buried in mudslides.

Agatha arrived on Mexico’s coast near Puerto Ángel with wind gusts of up to 169km/h (105mph) but lost strength as it moved inland.

However, torrential rains caused rivers to overflow and mountainsides to give way. Oaxaca Governor Alejandro Murat said that at least five people had been swept away by rivers.

Villages in the mountains are amongst those worst hit. The mayor of Santa Catarina de Xanaguía, which is located at a height of almost 2,000m (6,500ft), said that “there’s been much destruction”.

“We are cut off, there’s no power, the roads are damaged and several houses have been destroyed,” Mayor Ramos said.

Local media posted pictures of the devastation in mountain villages on social media.

The town of Santiago Xanica issued a cry for help saying its residents needed drinking water, food and clothes as well as medical assistance for a number of pregnant women.

Town officials said the main bridge had been destroyed and Santiago Xanica could only be reached by air. They added that six residents had been killed and 10 were missing.

Scientists from the US weather service have predicted a very active hurricane season for this year with above average numbers of named storms, hurricanes and major hurricanes.

DISCLAIMER: The Views, Comments, Opinions, Contributions and Statements made by Readers and Contributors on this platform do not necessarily represent the views or policy of Multimedia Group Limited.
Tags:
Hurricane Agatha
Mexico
Oaxaca state
Storm