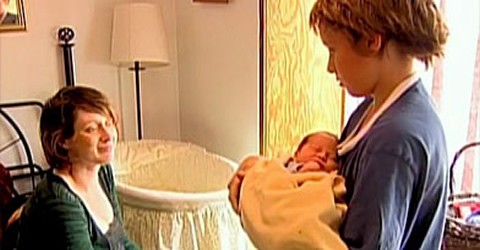 Gaelan Edwards, a 12-year-old boy from Campell River, British Columbia, delivered his baby brother when his mother went into labour and couldn’t make it to the hospital.

Gaelan was up late, “watching a movie about showgirls on television at about 2 a.m. Canada’s Globe and Mail newspaper reports, when he heard his mother call from her bedroom.

At first, he thought he was in trouble for watching TV when he wasn’t supposed to be, he told CTV.

Danielle Edwards quickly explained what was happening and told Gaelan that when he saw the baby’s shoulders, he needed to hold on to them and pull the baby out.

In his interview with CTV, Gaelan says that when he started to pull the baby, it started crying, which was a relief. “You know that’s a healthy baby,” he said.

After the baby came out, Gaelan clamped the umbilical cord and cut it with household scissors. He then helped mom push out the placenta before cleaning and wrapping his newly born brother.

Gaelan described the cord cutting as “gross” because “blood was spurting out everywhere.”

Gaelan Edwards learned just what to do when his mom went into labour from books and TV shows.