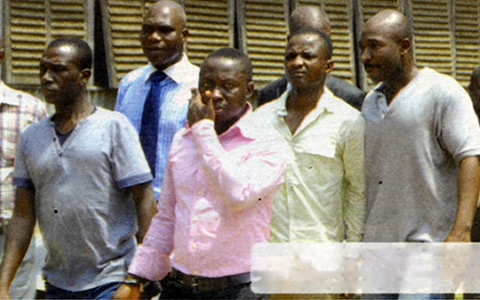 An Accra circuit court, presided over by Mr Francis Obiri, on Wednesday remanded three security officials and an unemployed man in prison custody for unlawfully possessing narcotic drugs and cannabis.

The other accused person is Eddisah Yakubu, unemployed.

The two policemen and the BNI official pleaded not guilty to the charge of possessing narcotic drugs without lawful authority, while Yakubu pleaded guilty to the same charge.

Counsel for the policemen, Mr Augustine Obuor, in applying for bail, said the first accused person, Yakubu, had carried his own burden by pleading guilty, since he owned the drugs.

Mr Obuor said the charge sheet did not support the charge preferred against his clients, since Yakubu had claimed ownership of the drugs, and, therefore, prayed the court to grant them bail.

He told the court his preparedness to lead evidence to prove his clients' innocence in the course of the trial but the court remanded the policemen in prison custody.

It also deferred its judgement on the case involving Yakubu, who pleaded guilty to the charges brought against him.

Facts of the case

Deputy Superintendent of Police (DSP) Idun Dery explained that the complainant in the case were policemen were with the Wa-Bamboi Police Highway Patrol Team, while accused were Corporal Okine and Lance Corporal Pwamang, both with the Bole District Police; Bani, an official of the BNI stationed at Bole, and Yakubu, unemployed.

He said on February 13,2014, the patrol team had a tip-off that Yakub was selling narcotic drugs at Banda- Nkwanta, a mining community near Bole.

The team went to Banda-Nkwanta where they arrested Yakubu with 38 wrapped rocky and 32 wrapped powdery substances, all believed to be narcotic drugs, and a quantity of dried leaves suspected to be cannabis.

During interrogation, Yakubu  claimed ownership of the narcotic drugs, believed to be cocaine, but denied knowledge of the cannabis.

He mentioned Corporal Okine, Lance Corporal Pwamang and Bani as his suppliers.

The prosecution said Yakubu revealed that he had given Corporal Okine, Lance Corporal Pwamang and Bani a tip-off, leading to the arrest of some drug peddlers at Bole and the seizure of the suspected drugs.

He also claimed that the policemen collected GH¢1,000 from the dealers, set them free and handed some of the substances to him as his share of the booty.

But when they were arrested, Corporal Okine, Lance Corporal Pwamang and Bani denied knowledge of the offence in their caution statements.