20 homeless after fire at Kayame in Ketu South Municipality 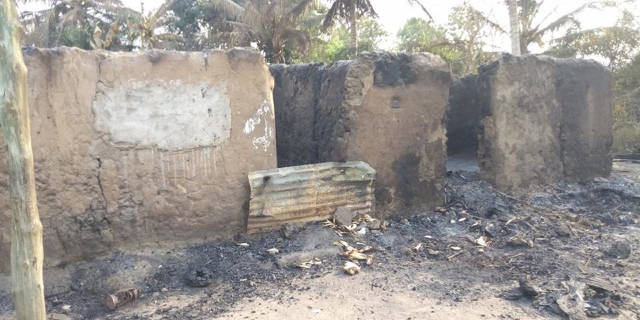 Kayame, a farming community in the Ketu North Municipality of the Volta Region, has been gutted by fire rendering about 20 residents homeless.

The fire which is believed to have started in the bush caused havoc to its victims as many lament the loss of their valued properties.

”I lost all my belongings and a lot of food items we harvested from last season, I don’t know what to feed my six children” lamented a 46-year old pregnant woman who lost her home to the fire.

The Assembly Member for the Devego-Dalame-Kayame Electoral Area, Emmanuel Agbotui, explained it took a combined effort of residents and fire service personnel from the Dzodze post, to douse the fire which at the time had already caused great destruction in the community.

He further noted that officials of the National Disaster Management Organization (NADMO), visited to assess the extent of damage and promised to return with some relief items.

Mr. Agbotui, however, appealed to benevolent organisation and individuals to urgently come to the aid of the affected residents who are taking shelter at the premises of the Awadada of the Weta Traditional Area, Torgbui Esru IV.

Torgbui Esru described the incident as ”bizarre and unfortunate” and further lauded the Member of Parliament (MP) for Ketu North, James Klutse Avedzi for presenting plastic bowls, plates, and cups to the displaced residents.

DISCLAIMER: The Views, Comments, Opinions, Contributions and Statements made by Readers and Contributors on this platform do not necessarily represent the views or policy of Multimedia Group Limited.
Tags:
Ketu South