3 brothers, 3 Olympic berths and 9 medals – Story of the Samir family 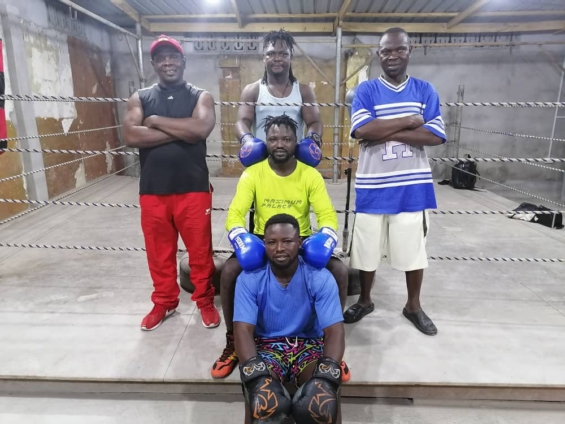 Based in central Accra is the modest nuclear family of Issah Samir Snr, his wife, Azaratu and their three children Bastie, Issah and Shakul – the three brothers who have now written history of a special kind in Ghana’s boxing.

The humble family of Dagomba extraction, from Northern Ghana, made of an artisan father and a mother who sells Koko (Ghanaian porridge delicacy), could potentially be the best-recognized in terms of bringing Ghana pride.

Recently, the youngest of three pugilists, Shakul, secured a ticket to the Tokyo Olympics after earning 275 points from the last African qualifier in Senegal and finishing 7th on the global rankings.

This cemented the Samir family’s legacy as the first to have produced three siblings who have all secured Olympic berths. And all things being equal, Shakul’s appearance in the ring in Tokyo this summer will cement their status as three Olympians from the same father and mother.

And yes, a lot of weight sits on Shakul’s shoulders as he is expected to win a medal, something that eluded his two elder brothers at the Beijing Games in 2008.

“I believe that Shakul will win the medals that his elder brothers could not win. This is the time,” Issah his father told Nathaniel Attoh in the Joy News documentary Olympic Boxing Genes – the story of the Samirs.

This is a conviction shared by trainer Ofori Asare, the three-star AIBA coach who has been in charge of Ghana’s national team for a cumulative 15 years.

“Shakul has not been there before and will be meeting more experienced boxers. The team captain Suleman Tetteh, for instance, is a 2012 Olympian and has the experience but Shakul has a big dose of confidence and talent to rest on,” coach Asare said.

Their father Issah basks in great pride that his not-so-privileged family has managed to achieve something as unique as that.

“As a family, we have nothing and do not have any hope. I didn’t have the money to see them through their education so I decided to invest my all in the boxing careers of my sons,” Issah Samir told Joy Sports.

He had to take the back seat during his professional career as a boxer due to injury to throw the energy and focus on his sons. This is something he hardly regrets and believes is divine.

“An elderly man gave me advice some years ago to let my sons pursue boxing and I did. This is something special that comes from God,” he said.

Bastie has the most of the nine medals bagging, four with Issah having three and two for Shakul.

So after having what easily passes as a solid foundation from the amateur ranks, Bastie and Issah are at a crossroad in their respective professional careers. Bastie is undefeated in 18 fights with 17 of them being knockout wins.

Of course, it’s the least to expect from a boxer who captained Ghana to the Beijing Games 13 years ago and recorded a chain of 10 knockout wins at the start of his career just like the legendary Azumah Nelson did in the 80s.

Added to that is an inspiration to have close contact with some of the biggest names in the sport. From his homeland, Ghana, are the stories of the 10 world champions. The nation’s first world champion, David Kotei (D.K. Poison), Africa’s greatest Azumah Nelson, ‘Marvelous’ Nana Yaw Konadu, Ike ‘Bazooka’ Quartey, the late Alfred Cobra Kotey, Joseph Agbeko, Joshua Clottey, Isaac Dogboe, Richard Commey, Emmanuel Tagoe have a lot of inspiring stories that can fuel Bastie’s ambitions.

This coupled with his sparring experiences with the legendary Floyd Mayweather Jnr and Roy Jones Jnr. are enough to make him push above limits to live his dream. However, just like his brother Issah, there have been issues along the lines of management and promotions.

The complications of covid19 also drew them back a bit. Issah has won 19 bouts and lost one. His first and only loss so far was recorded last year when he faced Aiboss Yerbossynuly in Astana. It cost him an opportunity to annex the WBC Asian, WBO and WBA International titles which could have landed him a shot at the major world titles. All is not lost yet as there is a big future ahead of the brothers should they land the right teams around them.

“We have I know that Boxing is not easy. We need support. For example, coach Asare has a lot of Olympians here and three brothers who have won medals at the All African games medals. He has a lot of good boxers here in Ghana yet he is working hard to build his own gym. This is something the Government should look at and help,” he said.

“We have given proof that we have good boxers in Ghana. Three brothers in the Olympics and African Games, the government should see that boxing is huge here. We need more support and more help.”

“With more help, we can become great boxers like Azumah Nelson, Ike Quartey, Mohammed Ali Floyd Mayweather and others. I know that we have talent for boxing in Ghana and we have the best coach in Africa and the best professional coach in the world,” Issah told Joy Sports.

The boxing documentary Olympic Boxing Genes – the story of the Samirs is available on YouTube.

DISCLAIMER: The Views, Comments, Opinions, Contributions and Statements made by Readers and Contributors on this platform do not necessarily represent the views or policy of Multimedia Group Limited.
Tags:
Bastie Brothers
Olympic games