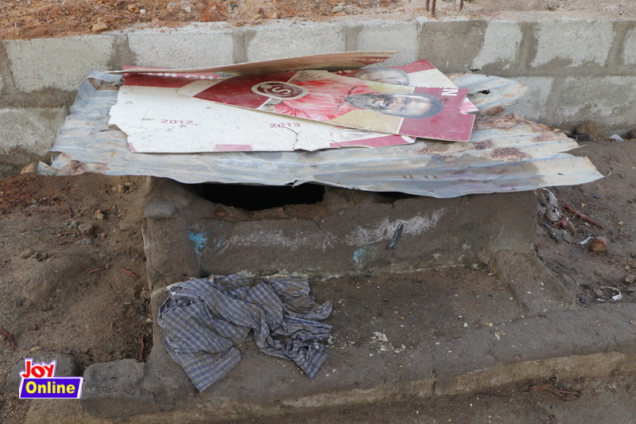 Residents at American Farm, a suburb of Ngleshie Amanfro in the Ga South Municipality of the Greater Accra Region have been thrown into a state of grief after a 3-year-old boy drowned in a well belonging to a resident.

The incident occurred around 3 pm when Paa George, a kindergarten pupil together with other children went out to play in the compound where the well has been constructed.

Eyewitnesses say, the boy while playing with his friends, stood on top of the cover on the well which caved in.

His friends started shouting for helping, drawing the attention of a resident, Madam Beatrice Sarkodieh who quickly informed some men of the incident.

Although efforts were made to save the child, the boy drowned before he could be pulled out.

Sources say, the well has been in existence for the past ten years but was previously covered with weeds.

Due to ongoing construction work, workers who were compelled to fetch water from it took off the weeds and replaced it with the wooden slates and iron sheets that caved in when the boy stood on it.

A visit to the house by myjoyonline saw some community members and close relatives gathered to sympathize with the bereaved family.

In an interview with mother of the deceased, Madam Matilda Dzikonu said she was still in shock.

The mother of 8 said she has always had eyes on the children since the lockdown was imposed. According to her, while monitoring the children as they play, she had stepped inside to pick up an item only to be called out by neighbors with the sad news.

After rushing to the scene, the child was taken to the Amanfro Municipal Hospital where he was pronounced dead on arrival.

The matter was reported to the Amanfro police where the necessary document was processed for the body to be sent to the morgue.

She tells myjoyonline due to the congested nature of the morgue visited, she had no choice but to bring his body back home for burial.

On his part the Assembly Member for Ngleshie Amanfro Electoral Area, Perseus Amadu Quarshie expressed his condolence to the bereaved family.

He also warned residents who have opened wells on their compound to cover them appropriately so as to prevent disasters of such nature.

He said the incident was uncommon hence his decision to start a campaign that aims at urging residents to be more watchful of their children.

Mr. Amadu Quarshie said residents will also be encouraged to cover up all dug-outs and refusal to do so will warrant a penalty or punishment.