7 things we learned on Newsfile: Agyeman-Manu, Ken Ofori-Atta could be in jail for 5 years 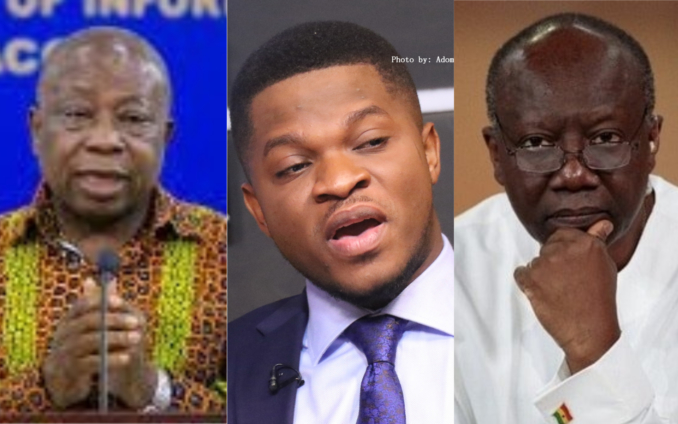 The Health Minister, Kwaku Agyeman-Manu and the Finance Minister, Ken Ofori-Atta, are at the centre of the Sputnik V vaccine scandal in which Ghana entered into an agreement with Sheikh Dalmook Al Maktoum for the supply of vaccines. But only 20,000 doses of the vaccines were supplied despite the controversial payment of $2.85 million.

Newsfile discussed the report of the nine-member ad-hoc parliamentary committee set up to probe the murky Sputnik V vaccine procurement deal, which fell short of recommending the Health Minister’s resignation or sack despite the public uproar.

The show also focused on the $200m Saglemi housing project saga as documents filed in court on behalf of the Attorney-General alleges that the contractor who executed the Saglemi project has been paid $179m despite executing work worth $64m. In addition, out of 2,172 acres of land released to the contractor, he is said to have developed just 651.75 acres.

Meanwhile, the Attorney-General says none of the completed 668 housing units is habitable, creating a situation where none has been purchased, loan facility remaining unpaid and occasioning a huge financial loss to the state.

Picking up from where he last left off in the Sputnik vaccine scandal, IMANI Vice-President Kofi Bentil laid into the Akuffo-Addo-led administration, accusing it of selective justice.

He said Ghana is run on two types of law – “ordinary people’s law and powerful people’s law” – and because the Health Minister, Kwaku Agyeman-Manu, falls under the latter, there will be no consequences for his decision.

“If the Minister is subject to the laws of Ghana, he would not be home,” he said. Kwaku Agyeman-Manu has taken a two-week leave as pressure mounts on the President to sack him.

2. There is anger out there – Bentil fears for the future of Ghana’s democracy

The legal practitioner and policy analyst expressed fears about the fate of Ghana’s democracy, explaining that the youth are growing disenchanted with governments over the years and the growing impunity.

He brought out his badges as a fighter for democracy in the era of PNDC rule, a military junta led by Flt. Lt. Jerry John Rawlings that overthrew the Limann government and truncated the third republic.

“There is a generation out there that does not appreciate what we went through to get constitutional democracy.”

“There is a generation out there that does not understand where we came from to have our democracy”, referring to the days when pro-democracy activists pushed for a return to multi-party democracy in 1992.

But weighing up the gains and the losses, Bentil asked, “have we achieved anything at all?”

While maintaining that a return to military rule should not be entertained, he pointed out that “democracies are fragile things”, which is why political leaders must show commitment to good governance and the rule of law.

After days of bashing the Health Minister in the Sputnik V vaccine scandal, the role of the Finance Minister, Ken Ofori-Atta, has come under sharp focus, especially after the Health Minister said during the Parliamentary probe that “to the best of” his knowledge, no money had been paid to Sheikh Al Maktoum.

It turns out it had been paid. Who authorized the payment? Finance Ministry. Where is the letter requesting the payment of the money? Martin Kpebu quizzed.

Whoever signed that letter has questions to answer. But, most likely, it would be the Finance Minister or the Ministry’s Chief Director who, if he signed, would be acting on the orders of the Minister.

“Do you have it?” Martin Kpebu asked Afenyo-Markin, who was the chairperson for the committee of Parliament that probed the matter.

“It was never brought to your committee,” he dared Afenyo-Markin to confirm if his committee ever saw any letter requesting the payment.

Afenyo-Markin was silent on this letter.

4. Agyeman-Manu could be spending five years in jail

The opposition NDC National Communications Officer, Sammy Gyamfi, came with a law to nail the beleaguered Health Minister on this “clearly indefensible matter.”

He quoted Section 96 (1a) of the Public Financial Management Act (2016) under Offences and penalties.

(1) A person, acting in an office or employment connected with the procurement or control of Government stores, or the collection, management or disbursement of amounts in respect of a public fund or a public trust who

(a) makes an unauthorised commitment resulting in a financial obligation for the Government,

(c) is responsible for any improper payment of public funds or payment of money that is not duly verified in line with existing procedures,

Sammy Gyamfi argued that in this Sputnik vaccine, the two Ministers breached (a) when they committed the country to an “unlawful” agreement that did not have the approval of Parliament or the Public Procurement Authority.

The NDC man said the Finance Minister, in particular, violated (c) when his Ministry made an “improper” payment to the Sheikh Al Maktoum.

Sammy Gyamfi concluded that these two Ministers could face up to five years in jail for breaching the PFMA.

5. CSOs have become too important because Parliament does seem to be on the beat

Kofi Bentil also criticised Parliament for its weak oversight responsibility on the Executive as he examined the Saglemi housing scandal.

He said when it comes to serving as a check on the Executive, Civil Society Organisations appear to play the role better than Parliament. “CSOs have become too important because Parliament does not seem to always be on the beat,” he said. The legal practitioner noted that several major decisions taken by Parliament suffer critical scrutiny.

6. Which is why Parliament needs a budget office

Fellow of Solidaire Ghana, Harry Yamson, called on Parliament to set up a budget office to track monies it approves for the Executive to spend. NPP MP for Effutu Afenyo-Markin nodded his approval.

Harry Yamson expressed sadness about the bastardisation of government policy and the public purse. He focused on the national housing policy drafted in 2013 and launched in 2015. But it is collecting dust, he said.

He said the policy aimed to increase access to low-income houses for the poor, women, the physically challenged and upgrade slums. Plans to incentivise the local estate development companies.

“We still don’t have any local participation in any significant manner”, and “ask me which slums have been upgraded?” he said.

“Why would you have a policy sit on it for six years and not make it work?” he expressed disappointment.

He said the $200m Saglemi housing saga is an example of wasting public funds and wasteful governments. “We are not mindful of resolving the governance issues,” he said.

The Solidaire Ghana Fellow argued Ghana could have solved low-income housing for $32million but for the lack of priorities.

“People should ask questions of our political leaders, that is why it has $32m to spend on vehicles but not $32million on low-income housing? It is wrong.”

Increasing access for the poor, upgrade slums. Ask me which slums have been upgraded.

The purse has become a football.

DISCLAIMER: The Views, Comments, Opinions, Contributions and Statements made by Readers and Contributors on this platform do not necessarily represent the views or policy of Multimedia Group Limited.
Tags:
Ken Ofori-Atta
Kwaku Agyeman-Manu
Newsfile