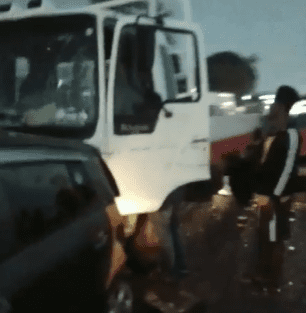 About seven vehicles were involved in a crash at the Achimota dual carriage on Friday morning.

The incident, which occurred at 5:30 am, involved a KIA Rino truck, two red minibuses, a white Benz sprinter, a Hyundai saloon car and two KIA taxis.

A pregnant woman present at the scene was rushed to the hospital to ensure she sustained no injury.

According to an eyewitness, the white KIA Rino truck driver sped carelessly after jumping the traffic light close to the Republic Bank.

“I hope the Police MTTD will investigate properly and get the driver of the white KIA Rhino truck prosecuted. If it were a much bigger haulage truck, he would have killed like six people this morning,” the eyewitness told JoyNews.