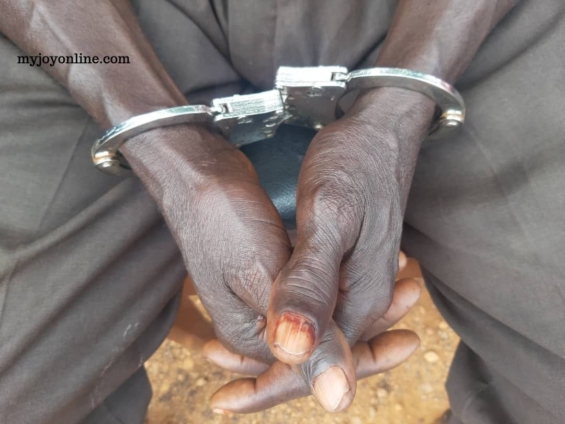 A 70-year-old man has allegedly hacked his 41-year-old nephew to death at Apinkra in the Ashanti Region.

The deceased is said to have been murdered in his sleep a few days after he had a scuffle with his uncle, JoyNews’ Erastus Donkor reports.

According to residents of the community, the deceased Yaw Owusu, is known for his quarrelsome attitude especially when drunk.

His attitude has subsequently driven away all persons previously living in the house, leaving his 70-year-old uncle.

Residents who spoke to JoyNews said Yaw Owusu during the argument hurled a stone at the head of his uncle who refused to retaliate.

According to them, they got suspicious when the uncle later reported of the death of his nephew by some unknown persons.

After a report to the Unit Committee of the community, the 70-year-old man was handed over to the police for interrogation while investigation commences into the murder.

“After the scuffle, the uncle hatched a plan to end it all and ended it in such a bizarre manner that when the gentleman was sleeping, he [the uncle] smashed his head several times with a metal bar.

“If you look at the wall, the remains of part of the head is scattered across the wall, and all over the floor. There is blood everywhere and he [the uncle] himself tried to wash the blood off him, but the attempt failed,” the reporter told Ernest Manu on JoyNews’ NewsDesk show.

Erastus added that bloodstains were found on the 70-year-old’s toe and finger nails.

Also, the dress he wore during the incident was soaked with blood.

Sources told the reporter the 77-year-old man has committed a similar crime about 10 years ago.

He was reportly arrested for shooting another person but disappeared after being granted bail.

He allegedly moved to his current location where he stayed with his nephew until the latest development.

He is currently in police custody and will be arraigned before court on Thursday, May 28.