About eight million people are under a Flash Flood Watch as Laura makes its way through the Mid-South, bringing with it threats of heavy rainfall and isolated tornadoes.

Early Friday morning, Laura crossed Arkansas and trekked toward southeastern Missouri as a tropical depression with winds of 35mph.

In preparation for the storm, Arkansas predeployed search and rescue teams along with National Guard members to assist.

Hurricane Laura is a very dangerous and rapidly intensifying hurricane. My Administration remains fully engaged with state & local emergency managers to continue preparing and assisting the great people Texas, Louisiana, and Arkansas. Listen to local officials. We are with you! pic.twitter.com/x0JoijLUpb

Throughout the day, the storm will head across Kentucky and continue eastward until it heads off the coast through New Jersey and Delaware by Saturday evening.

Laura’s expected to dump up to 6 inches of rain over central and northern Arkansas Friday, while parts of southern Louisiana, Mississippi and Missouri may see isolated rain totals of up to 5 inches.

A U.S. flag flies on a boat parked in front of a damaged building after Hurricane Laura made landfall in Lake Charles, Louisiana, U.S., on Thursday. 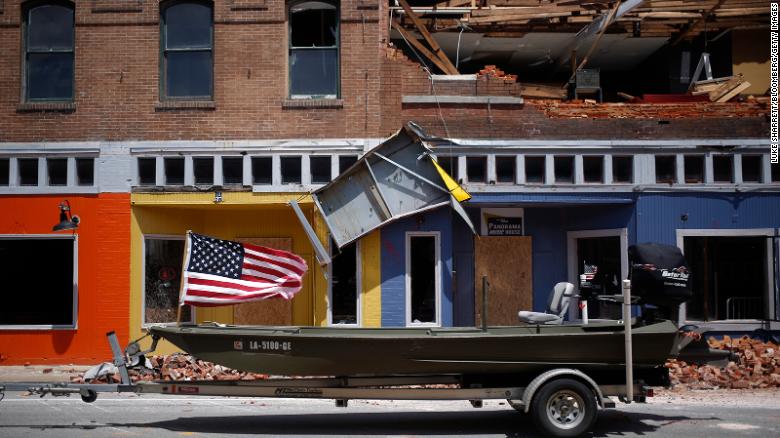 The rain may likely lead to flash flooding along streams, roads and urban areas and to moderate river flooding in parts of Louisiana, Mississippi and Arkansas, the National Hurricane Center said.

“The heavy rainfall threat and flash and urban flooding potential will spread northeastward into the middle-Mississippi, lower Ohio and Tennessee Valleys, and Mid-Atlantic States Friday and Saturday,” the center said.

Parts of Tennessee, Kentucky, Missouri, Arkansas, Alabama and Mississippi are at the highest risk for tornadoes Friday, while that risk will shift to Virginia, North Carolina, Maryland, New Jersey, Delaware and parts of Pennsylvania Saturday.

More than 500,000 customers didn’t have power in Louisiana early Friday and more than 200,000 were in the dark in Texas, according to poweroutage.us.

‘Like a week out of a bad science-fiction novel’

Laura made landfall early Thursday near Cameron, Louisiana, as a Category 4 hurricane, packing winds of about 150 mph.

Areas across the coast were pounded by ferocious winds and an unforgiving storm surge that left some neighborhoods littered with debris.”

#Laura has left hazards like flooded roads, downed power lines and displaced wildlife in our communities that no one should take lightly,” Louisiana Gov.

John Bel Edwards said on Twitter late Thursday. “Everyone needs to remain vigilant and be safe.”

At least six deaths were reported across the state following the storm.

Two died in Calcasieu Parish: A 24-year-old man and another male who’s age wasn’t disclosed by the state health department. 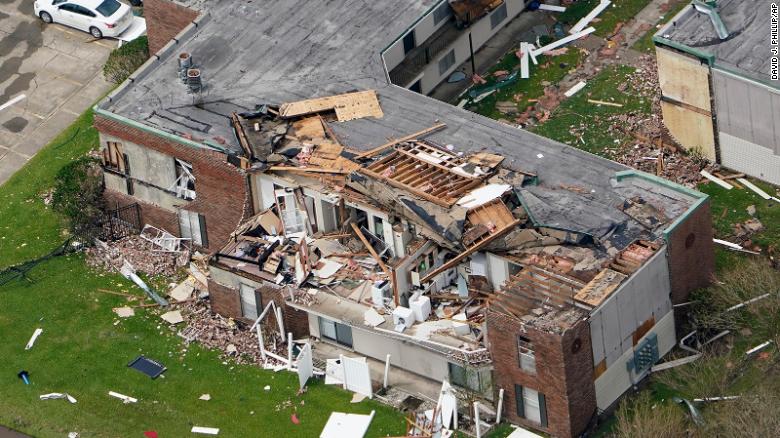 An apartment building is damaged Thursday after Hurricane Laura went through the area near Lake Charles, La.

In a message following the storm, Lake Charles Mayor Nic Hunter said in a Facebook post late Thursday the last “24 hours have felt like a week out of a bad science fiction novel.

“Water plants were damaged, the mayor said, and there is “barely a trickle of water coming out of most faucets” across homes in Lakes Charles, along with widespread power outages.

“If you come back to Lake Charles to stay, make sure you understand the above reality and are prepared to live in it for many days, probably weeks,” the mayor wrote. “‘Look and Leave’ truly is the best option for many.”

Across the state, many who evacuated ahead of the storm are afraid of what they may find when they return to their homes.

But his neighbor wasn’t as lucky: at least a foot of water flooded their home.