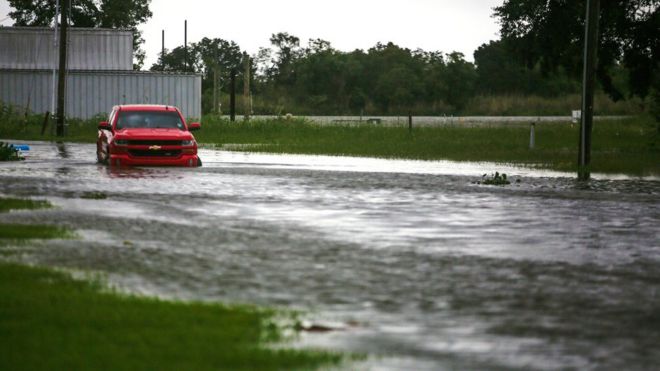 Hurricane Laura has struck the coast of Louisiana, with extreme winds causing flash flooding in the US state, the National Hurricane Center (NHC) says.

The category four hurricane is expected to cause an “unsurvivable” storm surge as it moves inland with wind speeds of up to 150mph (240km/h).

If it maintains those speeds it would be one of the strongest storms to ever hit the US Gulf Coast.

Half a million residents have been told to leave parts of Texas and Louisiana.

Hurricane Laura made landfall shortly after midnight local time (05:00 GMT) near the district of Cameron, in Louisiana.

The NHC warned any residents remaining in or near the path of the “catastrophic” storm to “take action now to protect your life… in a reinforced interior room away from windows”.

“Get under a table or other piece of sturdy furniture,” the NHC said, adding: “Use mattresses, blankets or pillows to cover your head and body.”

More than 190,000 homes in Louisiana reportedly lost power in the early hours on Thursday, according to the US tracking site PowerOutage. In Texas, more than 45,000 homes suffered power cuts.

Initially it was feared that both storms would hit Louisiana as hurricanes within 48 hours of each other – an unprecedented event – but Marco was downgraded to a tropical storm.

Laura, on the other hand, has strengthened rapidly from category three to category four, gaining 70% in power in just 24 hours.

It is now close to becoming a category five storm, which would mean maximum sustained winds of 158mph (254km/h).

Hurricane Katrina – which devastated New Orleans in 2005, killing more than 1,800 people – was a category five storm before weakening to a category three when it made landfall in the US.

Broken levees led to disastrous flooding in the city of New Orleans, which sits some 6ft (2m) below sea level, making it particularly vulnerable to storms.

US President Donald Trump told those potentially affected by the storm to “listen to local officials” as the storm was “very dangerous and rapidly intensifying”.

Evacuations are complicated by the Covid-19 pandemic. Texas Governor Greg Abbott urged families who could afford it to take refuge in hotels and motels to be distanced from others.

What can we expect from Hurricane Laura?

On Wednesday, the NHC said satellite images had shown that Laura had undergone a remarkable intensification to become a “formidable hurricane”.

In a series of tweets, it said Laura was expected to bring “life-threatening hazards” to parts of the coast of the Gulf of Mexico.

Well-built homes could incur major damage, trees could be snapped or uprooted and electricity and water would be unavailable for days or even weeks, it said.

Unsurvivable storm surge with large and destructive waves will cause catastrophic damage from Sea Rim State Park, Texas, to Intracoastal City, Louisiana, including Calcasieu and Sabine Lakes. This surge could penetrate up to 30 miles inland from the immediate coastline. #Laura pic.twitter.com/bV4jzT3Chd

Storm surges of more than 20ft (6m) are possible. In an update at 14:00 local time, the NHC reported 3.2ft of inundation already on parts of the Louisiana coast.

“To think that there would be a wall of water over two storeys high coming on shore is very difficult for most to conceive, but that is what is going to happen,” said National Weather Service meteorologist Benjamin Schott.

“The word ‘unsurvivable’ is not one that we like to use, and it’s one that I’ve never used before,” he added.

Governor Abbott urged people in the path of the storm to “take advantage of these final few hours to evacuate”.

“The power of Hurricane Laura is unprecedented, and Texans must take action now to get out of harm’s way and protect themselves,” he said.

More than 420,000 Texas residents have been ordered to leave, while an additional 200,000 were told to evacuate Calcasieu Parish in south-western Louisiana.

Port Arthur, Texas, is home to the nation’s largest oil refinery, and workers have been taken off at least 310 offshore facilities in the Gulf of Mexico, reducing oil production by 84% for a second day in a row, officials said.