A country of blackmailers - MyJoyOnline.com

A country of blackmailers 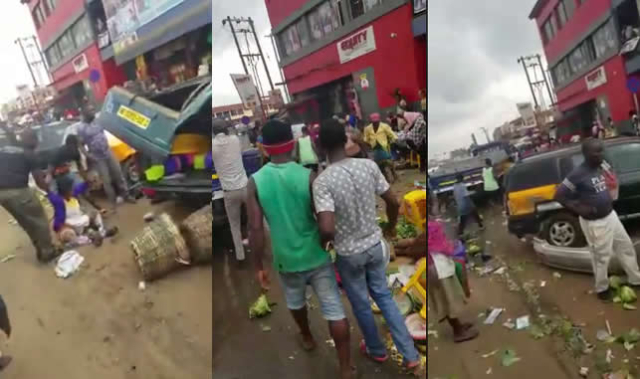 I could only watch about 8 seconds of the Ashaiman accident video. The sight of our women lying bloodied on the street with boxes of tomatoes scattered after being ‘plowed’ by a truck sickened me. I hear one person has been confirmed dead and scores have been severely injured.

I thought about what would happen after- it would be on the news, local assemblies and government officials would go inspect the scene, donations would be made then that’s it. Life would return to normal.

We are a country made up of blackmailers who are not ready for development! I’d tell you why i say that with four examples starting with the Ashaiman accident. Imagine what would have happened if say three days ago, a task force was sent to evict those sellers from the streets.

You would watch the news later that evening and hear the street sellers with red bands on their arms and heads saying things like “Where does government want us to sell? This is where we get our daily bread from. We have gone for loans to do this business.

How are we going to repay these loans? Government is wicked. Is this what you promised us? The elections would soon come around and we know what to do!” Selling on the streets is not only bad but it’s dangerous, and they know it, however the task force would have been met with serious resistance.

Just look at how filthy our streets and drains are! Plastics everywhere! Plastics are drowning us! Serious countries that actually wanted to solve this problem banned plastics outright.

In this country, whenever there is a call to ban plastics, that is when some so-called associations would come out and say “O if there is a ban, about hundred thousand people would lose their source of livelihood. We must go back to the negotiation table.

This ban would affect people, etc”. You would wonder, so our country should remain filthy just because of the pockets of some people? The will to ban the plastics would just die like it wasn’t even alive in the first place. It would rain, the towns would flood, people would die, there would be a memorial fund for the familes, cycle continues.

Let’s go to our banking sector. We all have knowledge of the two banks that went under last year. What you might not know is that that incident cost the Ghanaian tax payer over 2billion cedis. Yeah, that’s what it cost us.

There’s this  400 million cedis minimum capital requirement that Bank of Ghana has directed for banks to have at the end of 2018. This is just to ensure that in times of crisis like what happened last year, depositors would not lose their monies, at least the BoG can secure funds to pay depositors.

Just last week, some local banks started saying that due to they having difficulty in raising that amount, they would need more time, else 5000 jobs would be lost before the year ends. You see the blackmail there? If another bank goes down, we the same people would accuse the BoG of looking on while the banks do what they like.

Fisherfolk for years have been complaining about the dwindling fish stocks. The ministry of fisheries therefore decided that to help save the fish stock, there would be a ban on fishing for a month to help the fish population recuperate. The same people who claim they need help now turn and accuse those they asked to help of trying to take away their livelihoood. It’s crazy if you think about it.

The saddest part of the story is that governments usually yield to the blackmails. Governments are afraid to lose the next elections and therefore cowardly put away their plans. I have seen this over and over again with different governments. Are we ready for development at all? I do not think so. We are not ready to change! And we sure do know how to blackmail!