About 300 acres of crop farm burnt in Northern Region - MyJoyOnline.com

About 300 acres of crop farm burnt in Northern Region 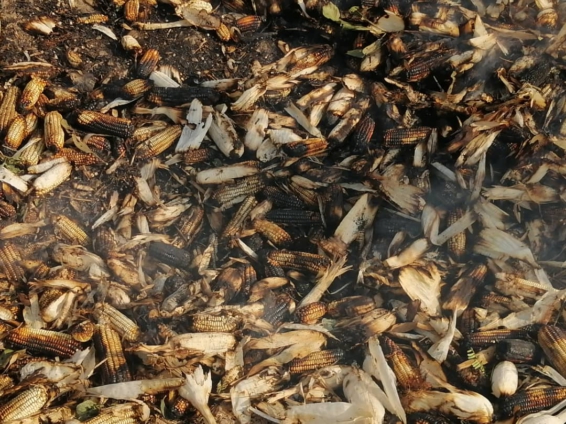 Some 300 acres of maize, cowpea, and soya bean farms belonging to the Tibzaa farms in the Northern Region have been burnt.

This brings the total number of farms destroyed by fire outbreaks in the Region this year to three.

He observed that the fire burnt uncontrollably from morning to midnight.

All efforts to quench the fire proved futile, he stressed.

Mr. Mahama submitted that, with the good yield of all the crops and a ready offtaker to buy the produce, he was expecting substantial cash input which has unfortunately gone down the drain.

The Tibzaa Farm CEO said the company could have harvested earlier if the necessary machinery was available.

“One of the challenges in agriculture in the north particularly commercial farming is the unavailable source of financing. If we had affordable and access funding to buy the right machinery we could have harvested before this fire.”

“The flow effect of the burning of the farm to the community is a huge one because we have not less than 150 people who work on this farm each year. This means their livelihood is all gone,” he added.

Mr. Mahama is hence calling for the enforcement of stringent laws to protect farmers and farmlands in the area.

Each year thousands of farmlands are destroyed when young men start fire to hunt for rats, squirrels, rabbits among others.

Herdsmen also burn bushes so that fresh grass can grow for their animals to graze.

These end up destroying farmlands and the vegetation in the region.

Amongst the victims of recent fire outbreaks is the Northern Regional Chairman of the NDC whose rice farm was burnt to the ground.

This was after the second national best farmer, Mahamud Mohammed Awal also lost some crops to a fire outbreak.

Other commercial farmers in the Region have also lost large farms and various sources of livelihood.