AFAG to embark on Red Revolution on Sept. 25th 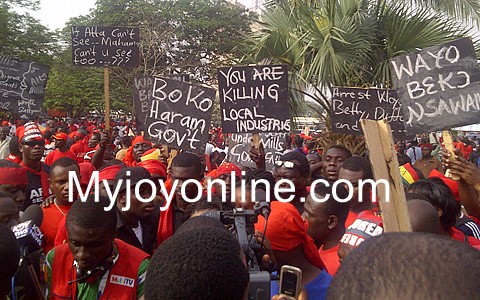 Pressure group Alliance for Accountable Governance (AFAG) has declared its intentions to hit the streets in yet another protest dubbed ‘Voices of the People Demo” next Tuesday the 25th September, 2012.

The “Red Revolution” march according to AFAG, is to protest the insistence of the Electoral Commission on creating 45 new constituencies ahead of the December 7th general elections, despite several calls from interest groups for the EC to suspend the move.

Read below, the full statement issued by AFAG on Monday.

We have invited you here again to help us disseminate to Ghanaians our disposition and the way forward on our Press conference dated 28th August 2012,titled “Afari-Gyan rescind your decision or Ghanaians will speak’’.

In the said Press conference AFAG gave Dr. Kwadwo Afari-Gyan two (2) clear weeks to “unconditionally rescind his decision or honourably resign as Commissioner, if he could not stand up to the challenge”.

We again made a passionate appeal to the Peace Council, the religious groups, the National chief Imam and other Civil Society groups to make their voices heard in order to save our country from any anticipated calamity in the forth-coming general elections.

It is worthy of note, ladies and gentlemen of the Press that, developments and comments relating to the creation of the 45 new constituencies have been most unfortunate to say the least.

Dr Kwadwo Afari-Gyan speaking on a Forum organized by the Institute of Democratic Governance (IDEG) said that Think Tanks which are criticizing the used formula ought to propose better alternate or stop criticizing.

On a GTV current affairs program, Dr Afari-Gyan, regretfully called well meaning Ghanaians commenting on the creation of the 45 new constituencies as ‘rubble rousers’. This is so unfortunate.

There is no better alternative than to refresh the mind of the Electoral Commission, that per the word “Review” and using the Population of the country as a yardstick, the Commission has Twelve (12) months to execute its constitutionally mandated powers. (Article 47).

We assumed the EC should have known better, but it looks like we have to school the commission a little bit: Per international best practice and common sense, the creation of new constituencies in less than two (2) months to the General elections is unthinkable. If the Committee’s report on the electoral dispute in Kenya and the civil unrest is something to learn from, then the carved path of the EC should not be entertained but condemned by all and sundry.

He again opined that, regardless of all the criticisms, he is resolute and would not allow any pressure to let him renege on his constitutional obligation.

Ladies and gentlemen of the Press, AFAG is not against the powers conferred on the EC by the 1992 Constitution, but blowing the horn of caution based on the exigencies of time, preparedness of both the EC and the citizenry and guarding against any anticipated electoral mishap.

As we address you now, we are very much inspired and motivated by the position taken by some eminent personalities and credible institutions in our country.

Before today, the Trade Union Congress of Ghana (TUC), the National Union of Ghana Student’s (NUGS), the Presbyterian Church of Ghana(PCG), the Northern Sector Action On Awareness Centre (NORSACC), the Centre for Democratic Governance(CDD), the Institute of Democratic Governance(IDEG) ,majority of the major Political Parties in Ghana, and some Eminent statesmen like former president Kufour Professor Klutse(former supreme Court judge) and Professor S.K.B Asante have all spoken against this untimely act.

Aside the fact that the Electoral Commission per its stance is acting in contravention to Article 55(5) of the Constitution of Ghana, which calls for parties to be democratic in their operations, common-sense should always prevail in the execution of a constitutional provision, particularly when there is a pending case at the High court in relation to its constitutional viability of the CI 78.

From the trend above, it has become more than clear that the Electoral Commission is insistent on its perilous route in the organization of this year’s Elections and that nothing can stop him except a RED REVOLUTION.