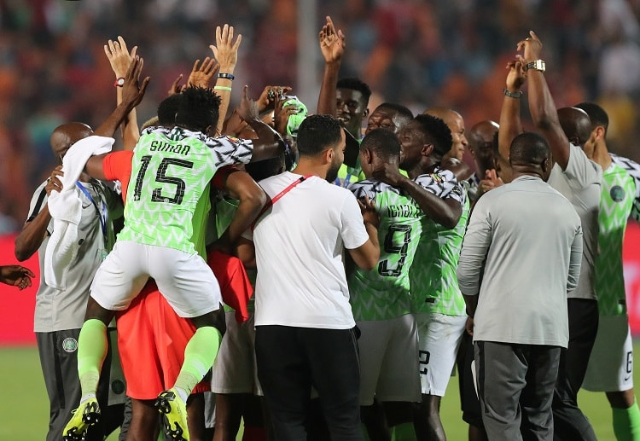 Nigeria are two wins away from winning the Africa Cup of Nations for the fourth time and equalling their great rivals Ghana.

Each Super Eagles player will pocket $110,000 if they lift the trophy in Egypt.

Following their quarter-finals victory over South Africa on Wednesday evening, each player’s bonus now stands at $72,500.

Nigeria got their competition underway with a hard-fought 1-0 win over debutants Burundi thanks to an Odion Ighalo second-half strike.  The victory earned them $10,000 each.

They made it two straight wins by beating Guinea 1-0 courtesy Kenneth Omeruo’s header to pocket another $10,000.

However, the players earned nothing after they suffered a shock 2-0 defeat in their final group game against debutants Madagascar.

The defeat meant they could not finish first and had to face defending champions Cameroon in the round of 16.

The Eagles produced arguably their best performance in recent years to defeat Cameroon 3-2 in a thrilling contest to set up a quarter-final date with South Africa.

The win earned each player a total of $37,500 from Nigeria Football Federation and two businessmen.

Nigeria faced Bafana Bafana in the last eight last night. They won thanks to a late goal by William Troost-Ekong to get $15,000.

They will face either Algeria or Ivory Coast in the semi-finals.  If they progress to the finals, each player will make $17, 500