AFCON 2019: Mahrez and Mane miss out on semi-final combined XI 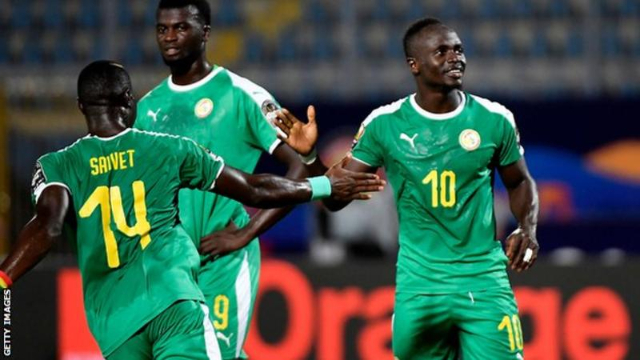 Now there are only four teams left in the 2019 Africa Cup of Nations tournament in Egypt, we have worked out a combined XI considering only players that have made at least three appearances in the competition this summer.

There is plenty of talent among the squads for Algeria, Senegal, Tunisia and Nigeria and some big name players have just failed to make the cut, notably Sadio Mane, Riyad Mahrez and Kalidou Koulibaly. All have garnered eye-catching WhoScored ratings at the tournament but narrowly miss out on a place in the XI due to the superior performances of others.

Alfred Gomis sat out Senegal’s opening two games but has benefitted from an injury to Reims goalkeeper Edouard Mendy to start their last three matches. Senegal haven’t conceded a goal in that time and Gomis has garnered a WhoScored rating in excess of 7.00 in every outing. If Mendy recovers in time for their semi-final against Tunisia then manager Aliou Cisse has a big decision on his hands.

Nice right-back Youcef Atal has carried his eye-catching performances from Ligue 1 into this summer’s Africa Cup of Nations and he will surely have a long queue of potential suitors after his signature in the near future. His availability is in doubt for Algeria’s last four clash with Nigeria after suffering a shoulder injury in the quarter-finals and his absence would be a huge blow. In fact, only one player has made more tackles and interceptions combined than Atal (25) at this tournament.

Algeria’s penalty shoot-out triumph over Ivory Coast in the quarter-finals was the only game they have not won inside regular time at this summer’s tournament. Djamel Benlamri has been key to their defensive resolve in Egypt, with Algeria conceding only one goal in his four appearances in the competition.  The 29-year-old has been particularly effective at alleviating the pressure on his team’s goal; winning more fouls per game (3.5) than any other defender.

Chelsea defender Kenneth Omeruo is the highest WhoScored rated centre-back at this summer’s Africa Cup of Nations tournament. The 25-year-old, who is now the longest-serving player at Stamford Bridge, will hope to finally have a place in at Stamford Bridge next season. He has done his reputation no harm this summer with a series of eye-catching performances for Nigeria. He is tied fourth for tackles and interceptions combined (25) at the tournament and has also played a direct hand in two goals in four appearances.

Ola Aina could have been Kenneth Omeruo’s team-mate at club level this summer, but for Torino’s decision to make his loan stint from Chelsea permanent on the eve of the tournament. The 22-year-old has registered one assist in four appearances at the Africa Cup of Nations and averages 2 tackles and 2.8 interceptions per game.

The Empoli midfielder is in the middle of a transfer tug-of-war between a few Serie A giants back in Italy but the 21-year-old hasn’t let any talk about his future get in the way at the Africa Cup of Nations this summer. Bennacer has registered two assists in five appearances for Algeria and has an impressive dribble success rate of (72.7%).

Despite asserting himself as one of the most promising young midfielders in the Premier League and continuing his fine displays into this tournament for Nigeria, Leicester have not been forced to fend off competition from their rivals for his signature this summer. Ndidi unsurprisingly ranks very high for tackles and interceptions combined, level with Atal (25) and behind only Wonlo Coulibaly (28).

Peter Etebo may have played his way into the thoughts of a few clubs this summer, as he is currently the highest WhoScored rated central midfielder at the Africa Cup of Nations. The 23-year-old has impressively won possession in the middle third (28) and attacking third (nine) more times than any other player at the tournament. Alongside Ndidi, Nigeria have developed a midfield line difficult to break down.

It has been Ismaila Sarr and not star man Sadio Mane that has caught the eye most for Senegal at the 2019 Africa Cup of Nations. There have been four penalties missed at this summer’s tournament in normal time and Mane is responsible for two of those. Instead, Sarr has been a pillar of consistency in his three appearances. The Watford target has scored one goal in that time and averages 3.8 dribbles per game. Not only that, but the 21-year-old is fouled 3.1 times  per game and manages 2.4 shots per game.

Tunisia captain Wahbi Khazri is the sole representative for his country in this best rated XI. The 28-year-old is carrying the weight of a nation on his shoulders heading into their last four clash with Senegal, having last won the tournament in 2004. Khazri has played a direct hand in two goals in five appearances and averages 3.5 shots and 3.1 key passes per game. Furthermore, only one player has created more clear-cut goalscoring chances than Khazri (three).

Manchester City Riyad Mahrez has impressed for Algeria this summer but 27-year-old Youcef Belaili has been their surprise package on the opposite flank. Belaili has scored twice in four appearances and averages 2 key passes and 2 dribbles per game, as well as winning 3.5 fouls per game. Not only that, but Belaili has not shirked his defensive responsibilities, averaging 2.0 tackles per game.