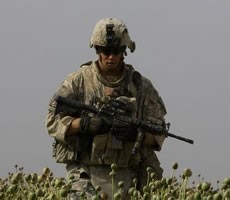 The US soldier accused of killing 16 Afghan civilians in a massacre that has undermined relations with Kabul has been named as Staff Sgt Robert Bales.

Senior US officials told the BBC the name of the suspect as he was heading back to the US to face charges.

He has now arrived at a military detention centre in Fort Leavenworth, Kansas, after being flown from Kuwait, the US Army said.

He will be held in solitary confinement pending charges, the Army added.

Sgt Bales’ lawyer, John Henry Browne, said he had been injured twice while serving in Iraq.

Mr Browne also said the accused, aged 38, had witnessed his friend’s leg blown off the day before the killings.

That incident has not been confirmed by the US Army.

The Taliban called off peace talks in the wake of Sunday’s deadly rampage – in which men, women and children were shot and killed at close range.

The US has stressed it remained committed to Afghan reconciliation.

Afghan President Hamid Karzai has also reacted angrily to the killings. He told the US it must pull back its troops from village areas and allow Afghan security forces to take the lead in an effort to reduce civilian deaths.

On Friday he said the US was not fully co-operating with a probe into the killings.

He also said the problem of civilian casualties at the hands of Nato forces had “gone on for too long”.

“This form of activity, this behaviour cannot be tolerated. It’s past, past, past the time,” Mr Karzai told the BBC’s Lyse Doucet at the presidential palace in Kabul.

Shortly after Sgt Bales’ name emerged, Mr Browne confirmed that was the name of the soldier he was representing.

Images quickly emerged online from a Department of Defense website thought to show him on duty in Afghanistan – and identifying him in the same unit as previously revealed by military officials, part of 3rd Stryker 2nd Infantry.

The photos were soon removed from the live site but remained available to access.

Sgt Bales has not yet been charged, but is the only known suspect in the killings – despite repeated Afghan assertions that more than one American was involved.

The Pentagon has previously said that he could face charges that carry a possible death penalty.

Such a trial could take years, contrasting with Afghan demands for swift and decisive justice.

“I can’t believe it was him. There were no signs. It’s really sad. I don’t want to believe that he did it.”

Speaking in Seattle on Thursday, where Sgt Bales is based at Joint Base Lewis-McChord, John Henry Browne said his new client was a “mild-mannered” man who bore no antipathy towards Muslims.

He described him as “a decorated soldier” who had an exemplary record before the shooting.

The lawyer also suggested the soldier, who began his first deployment to Afghanistan in December, was not fit to serve because of injuries he had suffered on previous tours of duty.

Mr Browne said that a car accident caused by a roadside bomb in Iraq had given the soldier a concussive head injury. Part of his foot had also been removed in surgery because of a battle-related wound, he added.

“I think it’s of interest that we have a soldier who has an exemplary record, a decorated soldier who was injured in Iraq, to his brain and to his body and then despite that was sent back,” he said.

Mr Browne, who has represented a number of high-profile clients including serial killer Ted Bundy and a teenage thief known as the Barefoot Bandit, said his client was a happily married man with two children, aged three and four.

DISCLAIMER: The Views, Comments, Opinions, Contributions and Statements made by Readers and Contributors on this platform do not necessarily represent the views or policy of Multimedia Group Limited.
Tags:
Afghanistan
Sgt Robert Bales