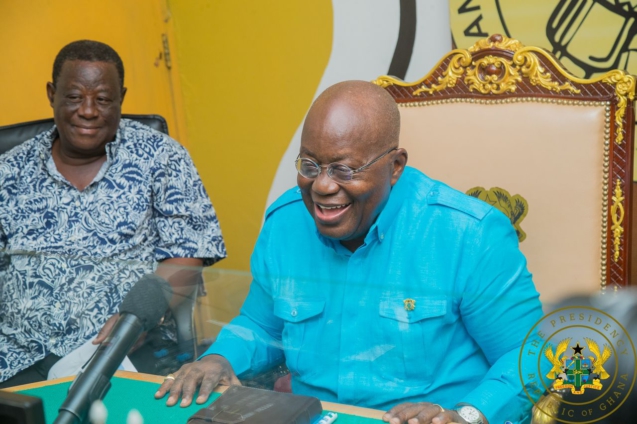 President Akufo-Addo has downplayed claims that his government’s mismanagement of the economy is the reason Ghana is seeking support from the International Monetary Fund (IMF) to stay afloat.

Rising inflation, depreciation of the cedi, debt management have combined to destabilise the economy leaving the country in a bad state.

But President Akufo-Addo did not take responsibility for the poor state of the economy.

Speaking on Radio Upper West as part of his tour of the region, he continued to blame Covid-19 pandemic and the Russian invasion of Ukraine for the state of the Ghanaian economy.

“No, it cannot be…I have given you these facts … I want anybody to come and challenge me, the facts that I am giving are fictitious … these are generally accepted facts around the globe.”

“Everybody who is a serious observer of both international and national events will know these facts are independent of the volition of this government,” he added.

According to him, before the Covid-19 outbreak and the Russia-Ukraine crises, Ghana’s economy was one of the fastest growing in the world.

“The two major crises that the world has suffered in the last two years-Covid-19 which disrupted global supply chain across board and disrupted the global economy significantly and the of course, the effects of the Russian invasion of Ukraine, our economy was one of the fastest growing economies in the world,” he said.

He added that it was clear that during the period without the crises “it [the economy] had seen a very successful management.”

“Our economy kept expanding at a very rapid rate. In fact, there are many places where the Ghanaian economy was been held up as a model of what can be done in countries of Africa etc,” he explained.

DISCLAIMER: The Views, Comments, Opinions, Contributions and Statements made by Readers and Contributors on this platform do not necessarily represent the views or policy of Multimedia Group Limited.
Tags:
Akufo-Addo
IMF Bailout