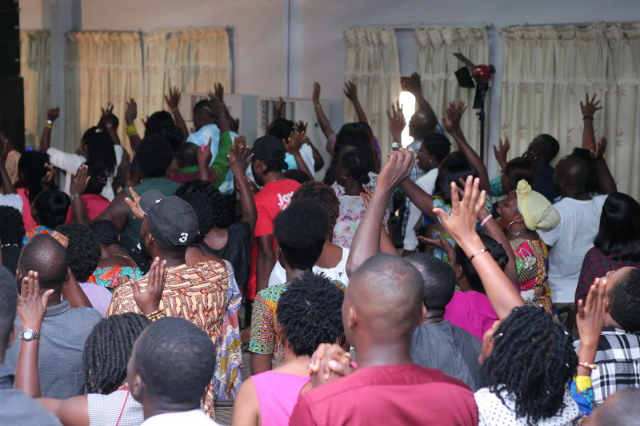 “And David said to Saul, Thy servant kept his father’s sheep, and there came a lion and a bear, and took a lamb out of the flock. And I went out after him, and smote him, and delivered it out of his mouth and when he arose against me, I caught him by his beard, and smote him, and slew him.” ”• 1 Samuel 17:34-35[KJV].

Day”• A non-holiday Monday. Time”• 9am. Location”• Somewhere in Lapaz, Accra-Ghana;specifically, a church filled to capacity. Congregation roaring in tongues amidstan overwhelmingly charged “Papa” preaching about giving. As a passerby, I listen in awe because of the masses gathered, it is only one person who is at work”• the one rehearsing how to take everyone else’s money!

The David story is an inspirational one, from varied life perspectives; a young shepherd boyhurled to fame by circumstanceswhen he chanced on an opportunity everyone else was afraid to take. Though he had never been a warrior, he singlehandedly slaughtered the local champion of the Philistines”• Goliath”• whose wealth of experience was as old as David himself, if not older.

Some preachers use the David-Goliath illustration to inspire others. A lot more use it as a prayer point to tear down any unseen Goliaths in the lives of their congregation. What most fail to notice is that David didn’t overcome his Goliath by just praying. He was a young man with experience!

David didn’t slay Goliath just because he was anointed. He was a skilled lion and bear slayer. He was anexperienced shepherd who had honed his skills in the bush, delivering his flock from every threat that came its way. Anointing without skill is disappointing!

Over the years, I have observed many Christians grow weary from unmet expectations in church. They spend all day and night fasting and praying. They give all their money in addition to make these prayers a reality. After so many years of unfulfilled dreams, they eventually give up.

Prayer without a skill needed for that expectation to become a reality is a leap of frustration, not a leap of faith. Praying fervently for an opportunity you have no skill or experience in is like pouring water on a stone, expecting it to germinate. Hello! God is not a magician!

If you pray for an opportunity, prepare for it. No one prays for rains when they have not even planted. Imagine God giving a novice David an opportunity to fight Goliath. That would have been a death opportunity. When we pray for what we are not even skilled for, we are only inviting shame or worse still, death.

It’s great to be anointed. However, it is greater to be skillfully anointed. We will live the entirety of our lives anointed but disappointed when we keep praying amiss”• praying for what we are not even qualified for.

If you are praying for an opportunity in a particular field, it goes without saying that you should have some skillsand experience in that regard. God won’t open a door in the medical field, for example, for someone who has no skill whatsoever in such a field. He will be aiding and abetting mass murder!

David was not a lucky young man. He was a prepared one. He was one who had a skill which had been honed over the years. He was a young man who had painstakingly invested in himself and his skills.

Prayer is not supposed to be a luck rehearsal. It’s supposed to be the rain that will water some seeds that have been sown. Prayer is supposed to bring opportunities to your skills and experience. Prayer without skill is utter frustration.

You need experience as much as you need prayer. Invest in your skills as much as you invest in prayer. Prayer is not an excuse for laziness. Go earn that skill however possible. It may be sacrificial but earn it anyway. It may not pay off but earn that experience all the same. The same skills and experience David uncomfortably earned in the bush led him to the palace!

Make an effort to earn a skill. After gaining the skill, create opportunities to use it. Praying without efforts to make those prayers a reality is utter frustration.

Gain some experience however you can. Waiting on God to open a door of which you have no idea of its keys… only breeds disappointment. In today’s church, many are frustrated because they have prayed enough but haven’t sharpened their skills enough. They have fasted enough but their experience in whatever they are praying for is nothing to write home about.

Mind you, God even put Adam in the garden and asked him to work it. God will not do for you what you can do for yourself. God will not anoint you with a skill you can humanly acquire. If you need it, go get it!

It is about time some preachers told their congregation to save their offertory to invest in themselves and their skills. It is about time they put on hold prayer meetings during working hours and told their followers to go earn some skills and experience for whatever they were praying for. Life doesn’t employ the anointed. It employs the skilled!

Prayer matters but skills and experience also do matter. The anointing is meant to boost the functionality of your skills, not a replacement for them.Your life is unbalanced if your prayer outweighs your skills. Always remember God hates unbalanced weights.

My prayers should match my skills because the last thing I would ever want to dream of… is to be anointed by a God in whom I am disappointed.

The writer is a playwright and Chief Scribe of Scribe Communications, an Accra-based writing company (www.scribecommltd.com).