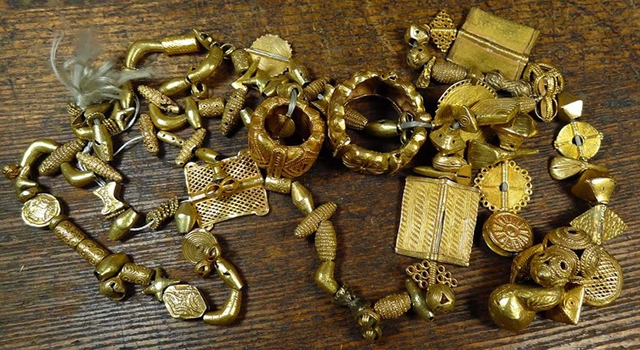 The Chiefs and elders of Antoa have arrived at the Manhyia palace in the Ashanti Regional Capital, Kumasi to formally brief the Asantehene of some stolen gold ornaments.

Some thieves broke into the palace and stole some gold ornaments.

The chiefs of the town were subsequently summoned by the Asantehene, Otumfuo Osei Tutu II.

Situated in Antoa, a town in the Kwabre East District of the Ashanti Region, where the gods are believed to be very powerful and perhaps the most popular in Ghana.

The town is under the Ashanti Kingdom and its chief reports to the Asantehene.

Joy News’ Erastus Asare Donkor reports that more than 15 elders of the Antoa stool, clad in black cloth and led by its ‘Adontehene’ were ushered into a private chamber of the ‘Asantehene’ Thursday at midday.

The incident which happened on 17th November, 2015, has brought so much fear to the town as inhabitants refuse to talk about the incident.

According to Erastus, the stolen items which are referred to as ‘puduo’ in the Akan dialect were stolen from the Antoa Place which is however in link to the shrine.

Police in the Ashanti region confirmed the incident and said investigations are ongoing.

Erastus however said that rituals have also begun to find the missing items.