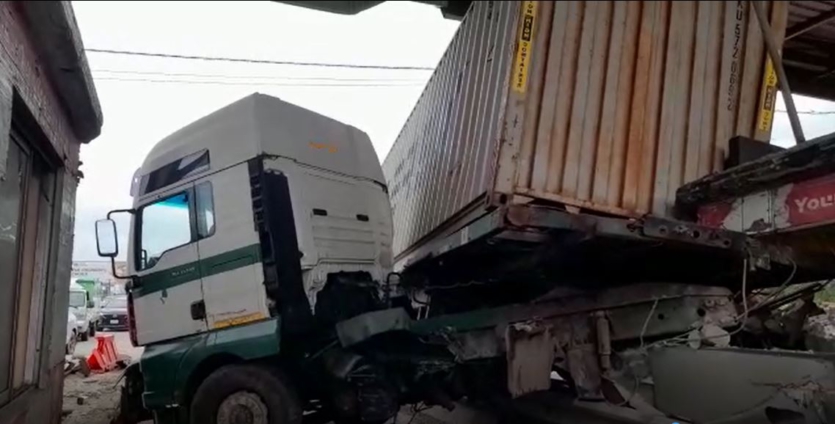 A MAN Diesel articulator truck with registration number GS 5340-11 has crashed into one of the tollbooths on the Accra-Tema Motorway.

The incident happened on Tuesday.

Narrating what led to the accident, an okada rider, Yakubu Tahiru stated that a saloon car heading towards Tema suddenly veered off into the lane of the truck.

According to him since the driver of the truck was also speeding, he ended up hitting the boot of the salon car.

However, parts of the tollbooth and the articulator truck were damaged.

In an interview with the truck driver, he said he has embarked on several long journeys plying the Accra-Tema motorway but has never been involved in an accident.

“I have travelled from Ghana to Nigeria, Mali, Togo, Guinea and I always ply this route,” he said.

He stated that his intention was to save the driver of the salon car from injury hence the decision to it the booth instead.

“People would say I was driving too fast, which is why this happened, but I am the one behind the wheel, so I know what speed I was driving at. Also, this location is paved, and if it rains, it becomes slippery, so I know how I drive here… The accident would not have happened if the other driver had not crossed me,” he said.

DISCLAIMER: The Views, Comments, Opinions, Contributions and Statements made by Readers and Contributors on this platform do not necessarily represent the views or policy of Multimedia Group Limited.
Tags:
Accra-Tema motorway
Articulator truck
tollboth