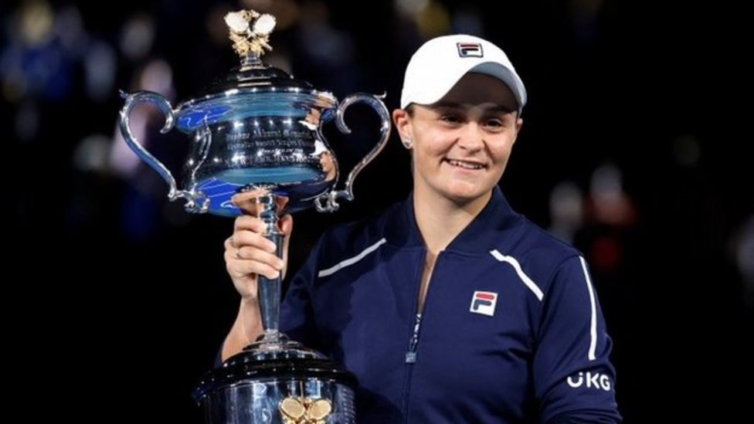 World number one Ashleigh Barty has shocked the sporting world by announcing she will retire from professional tennis at just 25.

The Australian made the announcement on social media on Wednesday, saying she was leaving to “chase other dreams”.

“I’m so happy and I’m so ready. And I just know at the moment in my heart, for me as a person, this is right,” she said in a video.

Barty won her first Grand Slam at the 2019 French Open.

She has remained the top-ranked player since then, backed up by success at Wimbledon last year.

In January, she became the first home player to win the Australian Open men’s or women’s singles title in 44 years.

Serena Williams is the only other active female player to have won major titles on clay, grass and hard courts.

“I wasn’t sure how to share this news with you so I asked my good friend [retired Australian tennis player Casey Dellacqua] to help me,” Barty said on Wednesday.

“I am so thankful for everything this sport has given me and leave feeling proud and fulfilled.

“Thank you to everyone who has supported me along the way, I’ll always be grateful for the lifelong memories we created together.”

Barty added she was “absolutely spent” and “physically I have nothing more to give”.

Women’s Tennis Association head Steve Simon said Barty was “one of the great champions” and would be missed.

“Ashleigh Barty with her signature slice backhand, complemented by being the ultimate competitor, has always led by example through the unwavering professionalism and sportsmanship she brought to every match,” he said in a statement.

Barty’s Australian Open win had cemented her reputation as a national hero. In an emotional moment, she was presented with her trophy by fellow Aboriginal Australian tennis champion and mentor Evonne Goolagong Cawley.

A recent report by The Age newspaper highlighted how the number of Australian children playing tennis had climbed by nearly 30% in the past year. Many of them are from Indigenous communities and many are girls.

“I’m really proud that I can be a small part of getting more kids into sport and chasing their dreams,” she told BBC Sport in January.

Barty took a break from tennis in 2014, citing its intense demands, and played in the inaugural season of cricket’s Women’s Big Bash League.

She said that was “a very different feeling” to her retirement on Wednesday, adding tennis had “given me all my dreams plus more”.

DISCLAIMER: The Views, Comments, Opinions, Contributions and Statements made by Readers and Contributors on this platform do not necessarily represent the views or policy of Multimedia Group Limited.
Tags:
Ashleigh Barty
Australia
Tennis