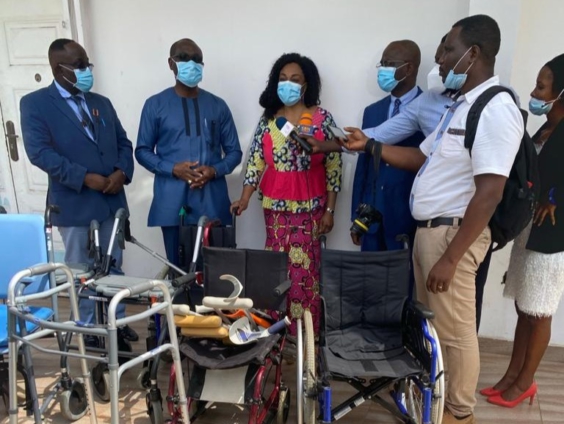 The Ghana Baptist Convention (GBC) has taken the lead to donate towards the 1000 wheelchairs per region campaign by the Henry Djaba Memorial Foundation.

The items were secured by the GBC through the efforts of Amerley Ollennu Awua-Asamoah, Ghana’s Ambassador to Denmark from the Global Medical Aid in Denmark.

The Ghana Ambassador to Denmark has since 2018, secured hospital equipment and consumables in excess of $6 million from the Global Medical Aid.

Beneficiaries of the equipment include the some District and Municipal Hospitals through the First Lady’s Foundation, Rebecca Akufo-Addo Foundation, the Wenchi and Tetteh Quashie  Hospitals and Ghana Baptist Convention Hospitals.

Rev. Adu-Gyamfi said the donation was in response to a request by the management of the Henry Djaba Memorial Foundation to raise a minimum of 16,000 wheelchairs to assist Persons With Disability (PWDs).

He commended the Foundation for coming out with such a laudable initiative to assist PWDs to become mobile and to reduce their dependency on other members of the society.

The Executive President assured the Henry Djaba Memorial Foundation of GBC continuous support in their quest to making life more dignified for the PWDs.

Receiving the items, the Executive Director of the Henry Djaba Memorial Foundation Otiko Afisah Djaba expressed her gratitude to the Ghana Baptist Convention for their swift response to their request.

She revealed that nothing would stop her bid at raising the targeted 16,000 wheelchairs to aid the PWDs.

The former Gender Minister said PWDs were also citizens of Ghana and must be respected and cared for irrespective of their social or economic background.

She appealed to the Convention for more support and called on other faith-based organisations, donor organisations and individuals to support the 1000 wheelchairs per region campaign.

DISCLAIMER: The Views, Comments, Opinions, Contributions and Statements made by Readers and Contributors on this platform do not necessarily represent the views or policy of Multimedia Group Limited.
Tags:
Ghana Baptist Convention
Henry Djaba Memeorial Foundation