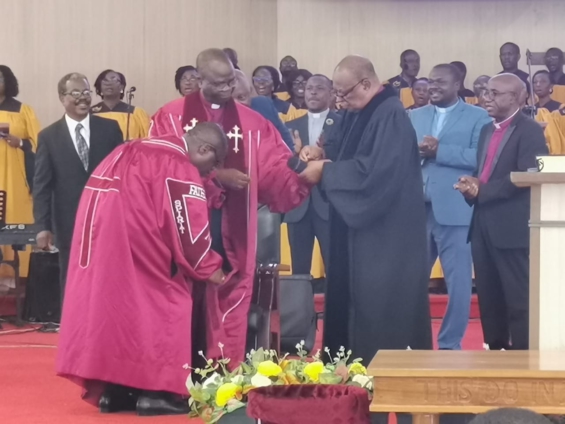 Rev. Enoch Nii Narh Thompson, incoming President been decorated with the Presidency Gon by the immediate past President, Rev Dr Adu-Gyamf and Rev. Steve Asante, a former President of the Convention.

This falls in line with the 10 year’s Strategic Plan of the Convention.

Rev. Enoch Thompson revealed the vision during the weekend when he was inducted into office as the leader of the Convention for the next four years.

Rev. Charles Oppong-Poku, Vice President in-Charge of Ministries and an 11-member Denominational Board was also inducted by the Convention to work hand-in-hand with the Executive President to ensure the betterment of the Convention.

The induction service which was held at the Calvary Baptist Church at Shiashie in Accra, was officiated by the immediate past Executive President, Reverend Dr. Ernest Adu-Gyamfi and Rev. Steve Asante, a former President of the Convention.

The officiating Minister, Rev. Dr. Adu-Gyamfi led the incoming Executive President to take the Oath of Office and Secrecy.

According to Rev Enoch Thompson, he would rely solidly on the strength and direction of the holy spirit to drive his vision of ensuring: spiritual revival, financial solvency, discipline, human resource development and infrastructure for worship.

He expressed his appreciation to the members of the Convention for reposing their trust and confidence in him.

Rev Adu-Gyamfi, the outgoing Executive President, congratulated the new President and reminded him of his roles and responsibilities under the Constitution of the GBC.

He indicated that the new President shall now represent the Convention at the local and international levels and become its official spokesperson.

Rev Adu-Gyamfi urged all members of the Convention to support the new Executives spiritually, physically, financially, morally and socially to succeed.

The Majority Leader in Parliament, Osei Kyei-Mensa-Bonus was the Special Guest for the occasion.

Rev. Thompson was born on 5th February 1964 and is married to Mrs. Dina Susanna Abena Thompson. They are blessed with four daughters.

He is currently pursuing his PhD at the Trinity Theological Seminary, Legon.

Rev. Enoch Nii Narh Thompson has served the Ghana Baptist Convention in various capacities. Prior to his election, he served two terms as the Vice President, Ministries of the Convention.

DISCLAIMER: The Views, Comments, Opinions, Contributions and Statements made by Readers and Contributors on this platform do not necessarily represent the views or policy of Multimedia Group Limited.
Tags:
Baptist Convention
Ghana Baptist Convention
Operation Showers of Blessing