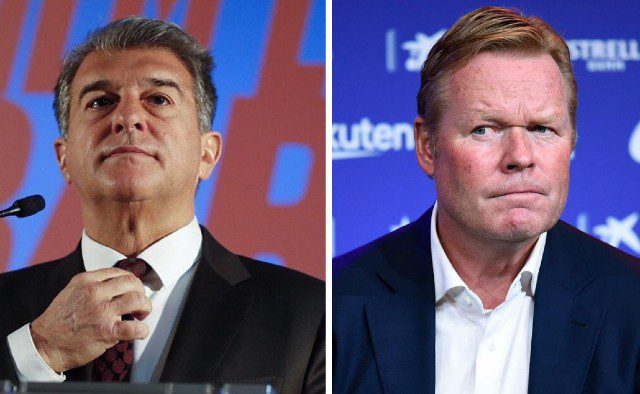 When Joan Laporta was elected Barcelona president in March, one of the first things he did was make it abundantly clear that Ronald Koeman did not figure in his long-term plans.

Six months later, he suggested he was on the verge of extending the Dutch manager’s contract for a further year.

But six months and two weeks later, it now looks as if the only thing keeping Koeman in the job is the fact he would be due a huge pay-off. And that he is the focus of attention – useful to the board in a time of crisis.

What on earth could have occurred to bring about this lack of balanced thinking from Laporta?

Unsurprisingly, money has a lot to do with it, or in the case of Barcelona, the lack of it.

Let’s not mince our words here. Barcelona are skint, potless, brassic, broke. The finances dictate a lot of what is being decided.

But the situation is becoming so tense between the president and the manager that the club are looking for alternatives and, depending on the next few results, they might have to use a big chunk of their small savings to get rid of a manager who does not follow the official line because he feels betrayed.

Roberto Martinez, who wants to continue with Belgium at least until the end of the Nations League campaign, is one of the candidates to replace him.

So how did we get to this point?

Laporta and Koeman met before the start of this season. At lunch, Laporta asked the Dutchman to give him 14 days to decide whether or not the club would continue to have him as their manager or, to put it a slightly different way, 14 days to see if they could find anyone they fancied for the job more than him.

Koeman’s agent, Rob Jansen, summed it up perfectly: “Imagine: I want to marry you, but I have doubts. Give me two weeks to find a better partner. If I can’t find the right person, we will get married anyway!”

He couldn’t, of course. Laporta didn’t fancy bringing in Barca midfield legend Xavi at that point and had no chance of getting Julian Nagelsmann, whom Laporta admires because of his love for detail and his modern methods. He was never going to opt for Barcelona over Bayern Munich, having already reached an agreement with the Bavarians.

So instead, what we have now is a marriage of inconvenience – and it’s fair to say that since then, the two haven’t exactly walked hand in hand into the sunset to enjoy a life of wedded bliss.

The situation inherited from the previous regime means the club now find themselves very much between a rock and a hard place. Koeman would have settled for a one-year deal. Previous president Josep Maria Bartomeu – in his wisdom – offered him two. Bad enough, but that was just for starters.

The Dutch manager had a permanent contract as coach of the Netherlands, which meant Barcelona had to pay almost 6m euros to release him. Except they didn’t have it, so Koeman decided to cough up the fee himself in August 2020, but only after making an agreement that he would be reimbursed the full amount if he did not get a third season at the club.

And it gets worse. Barcelona will have to pay even more if he is fired in the interim. Last week, TV3 reported that a high severance payment – amounting to a total of about 12m euros – is on the table.

In other words, Koeman gets paid handsomely (and more or less the same amount) if he does the job, if he gets fired or if his contract gets renewed. Another terrible legacy of the Bartomeu era.

Logically, one would have thought this would be the perfect time to batten down the hatches and try to make the best of a bad job. This, however, is the ego-fuelled world that is Barcelona FC; normal rules do not apply.

Despite knowing that getting rid of Koeman was going to necessitate putting his hand very deep into what are currently very shallow pockets, Laporta changed tack a couple of weeks ago by summoning journalists for an off-the-record briefing about what was going to happen with the coach.

He told them he was prepared to renew Koeman’s contract but only on the condition he reverted to playing the possession-based Barcelona style of football, always used a 4-3-3 formation and picked Samuel Umtiti and Riqui Puig more often in the starting line-up.

Laporta’s attempt to establish himself not only as the man responsible for the club’s financial decisions but also, apparently, as the person in charge of the football philosophy and the future of the manager is a new sign of a club living in confusion.

It is fine to say Barcelona have to play the Cruyff way but it has not been decided within the club exactly what that means now football is faster and more physical. Koeman is troubleshooting, is not an ideologist and does not have any inclination to start that debate.

It didn’t take long for the manager to hear about that briefing to reporters, not least because a collection of Barcelona journalists were never going to keep a bombshell of these proportions to themselves just because the president had told them it was off the record. And Laporta would have known that.

It is difficult to imagine a scenario in which Laporta could have demeaned Koeman more or shown him less respect. The manager was not a happy man.

From that moment on, Koeman has taken every chance he gets to remind everyone prepared to listen that his belief is that he is the person doing all he can to drag Barcelona out of their current plight.

It is he who has done everything the club have asked of him since his arrival, including overseeing the brutal culling of many of the club’s legends – Luis Suarez was thrown away in a phone call which, by all accounts, lasted less than 90 seconds.

It is Koeman who was told he would have to deal with the loss of Lionel Messi and Antoine Griezmann (a departure completed on the last day of the transfer window) and it was the Dutchman who also followed the wishes of the club by placing a massive importance on the young players coming through the system.

Koeman was quick to point out he had no fewer than four teenagers on the pitch at the end of last week’s Champions League loss to Bayern. Yusuf Demir (18), Alex Balde and Gavi (both 17) had by then joined the 18-year-old Pedri on the pitch, with El Mundo Deportivo saying at the final whistle the Barcelona side looked like a children’s nursery.

The average age of the 11 against Granada in La Liga in the following game was 24, with seven under-21s used.

Of course, what he omits to mention is that his actions are the result of necessity rather than inspired innovation and that he was the first one asking the club for reinforcements (Georginio Wjinaldum, for instance) when he arrived.

While the youngsters were loudly praised for their efforts against Bayern, the reality is they only came on at a point when the game was effectively lost, which would not suggest Koeman sees a policy of faith in youth as a solution to his problems.

Koeman, who has eight senior players injured including Ousmane Dembele, Sergio Aguero and Ansu Fati (himself only 18), insists he will use youth. Fans seem willing to accept that, despite the players not being ready to lead a team like Barcelona, because they represent a more hopeful future than seeing the usual faces.

The situation is tense and – with varying levels of hypocrisy in evidence from both sides – the rope is being stretched to breaking point. Laporta is getting fed up with putting out all the fires that keep emerging around the club every time Koeman opens his mouth, while the Dutchman, protected by a bulletproof contract, is probably thinking ‘as you sow, so shall you reap’, and only just resisting adding the phrase: “Come on then, sack me!”

For the time being, he will carry on doing his own thing.

After the Bayern game Laporta met with a couple of key directors to discuss what could be done because he was so upset. Koeman had picked a side to avoid losing badly rather than to go for the win. For the first time in Champions League history, Barcelona did not have a single shot on target.

After the match Koeman made no attempt to hide that fact. “If we played more open, the loss would have been bigger,” he said.

And it’s that absence of fight and that level of acceptance from people like Koeman and defender Gerard Pique, who shrug their shoulders and come out with phrases like “it is what it is”, that is driving Laporta to distraction. It is why the two men will never be able to sing from the same songsheet.

Damage limitation at home in the Champions League against any club – even the mighty Bayern – is anathema, a humiliating white flag to Laporta.

Koeman will say you can’t make a silk purse out of a sow’s ear and that he is doing the very best he possibly can with what is available to him. His side are unbeaten in the league, two wins and two draws putting them seventh, six points off reigning champions Atletico Madrid with two games in hand.

But against Granada on Monday when they managed to squeeze out a last-gasp 1-1 draw, a side containing the creative talents of Sergio Busquets, Sergi Roberto and Frenkie de Jong in midfield lumped in 54 crosses, proof positive that in Koeman, Barcelona have a manager who does not fully believe in the club’s style.

So despite not getting on, being poles apart on football philosophy, enduring a relationship that is becoming more and more toxic with every passing day and sniping at each other on a continual basis, both men are likely to be compelled to carry on working together.

But make no mistake, if Laporta had the money, plus anyone ready, willing and able to replace Koeman, the Dutchman would be toast.

In this battle between where Barcelona should be (Laporta’s dream) and the realities of life that determine where they actually are (Koeman), it’s difficult to see how this can have anything remotely close to a happy ending.