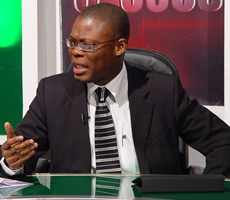 The National Democratic Congress (NDC) Member of Parliament (MP) for Ketu South has described as “shallow and hypocritical” the opposition New Patriotic Party's claim that Ghana has a bloated electoral register.

According to him, the NPP in their desperate attempt to win the 2016 election are fabricating stories to deceive Ghanaians.

The NPP has been making a strong case for the Electoral Commission to come up with a new register ahead of the 2016 elections.

The party led by its vice presidential candidate; Dr Mahamadu Bawumia revealed that over 76,000 names of Togolese nationals who are registered to vote in their country can be found in the Ghanaian electoral roll.

Some of these persons, he said, were found in the Volta Region with Ketu South cited as one of the constituencies where the anomalies abound.

But Fiifi Kwetey in a rebuttal on Asempa FM’s Ekosii Sen programme Thursday urged the NPP to first take the log out of their eyes before they remove the speck from other peoples eye.

In his view, the supposed bloated electoral roll in Ketu South “is just a drop in the ocean” because those in the Ashanti region are worse.

“Kwabre West and many constituencies where the NPP won had a voter population as high as 50 percent so how dare the NPP talk about Ketu South?” he quizzed.

The Ketu South MP alleged that the NPP singled out only strongholds of the NDC in their research.

“What the NPP did is nothing more than a deliberate attempt to denigrate the people of Ketu South” he added.

He also questioned Dr Bawumia’s reliance on figures from the Ghana Statistical Service because according to him, he [Dr Bawumia] has always condemned the figures released by the Service.

Fiifi Kwetey said given the NPP’s "conduct and ethnocentric conduct," it will remain in perpetual opposition.