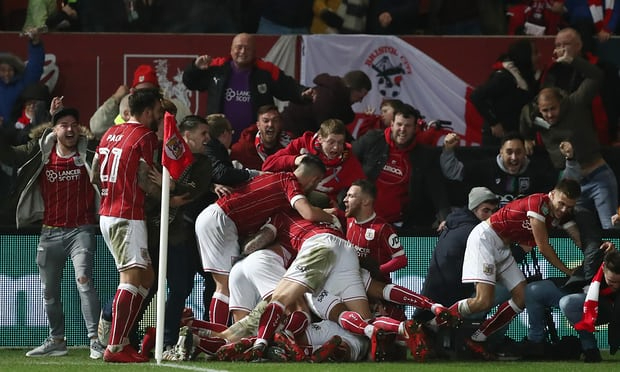 Korey Smith scored an injury-time winner as Championship side Bristol City stunned holders Manchester United to reach the semi-finals of the Carabao Cup.

Smith's turn and strike in the final minute of time added on booked a semi-final against Premier League leaders Manchester City.

After an even first hour, Joe Bryan's rasping left-foot strike across goal into the top corner gave the Robins a shock lead at a packed Ashton Gate.

Their advantage lasted just eight minutes, with Zlatan Ibrahimovic marking his first start since 20 April with a low free-kick past Luke Steele, before Smith struck.

There were jubilant scenes at the final whistle, with much of the sell-out crowd rushing on to the pitch in celebration and taking selfies with some of the City players.

Despite fielding a side showing 10 changes, United manager Jose Mourinho had recalled Paul Pogba after a three-match ban and picked a forward line of Ibrahimovic, Marcus Rashford and Anthony Martial.

The visitors did carve out numerous opportunities from open play, with Ibrahimovic and Rashford both striking the woodwork before half-time.

But, despite clearly tiring towards the end, City continued to throw numbers forward and were rewarded with Smith's dramatic winner – making United the fourth Premier League side they have knocked out this season, after Watford, Stoke and Crystal Palace.