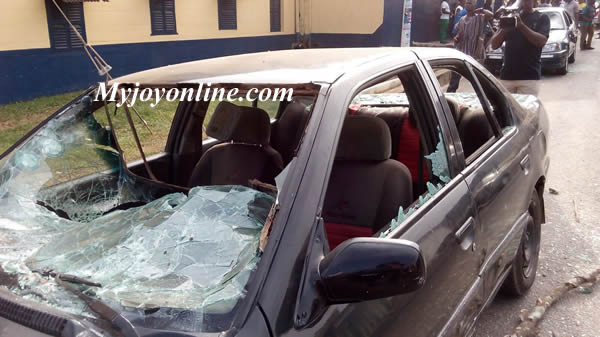 An autopsy report on one of the two men who died following clashes at Ntsin, a suburb of Cape Coast in the Central region last week, is pointing to police brutalities as cause of his death.

Kwesi Sabado died shortly after he was arrested during a riot by angry youth who attacked the police station, destroying dozens of vehicles and other properties.

The violence followed a police swoop in the area and accusations by the residents of police harassment.

Central regional police commander DCOP Ransford Moses Ninson had told Joy News this week that the deceased died an hour after he was taken to the hospital.

He was confident the autopsy report would exonerate the police.

But the autopsy report proved otherwise.

He noted that around 3pm, a police officer and a civilian brought Kwesi Sabado to the facility but preliminary examination by his assistant indicated that he had died before he was brought to the medical facility.

The document presented to him by the assistant had BBD – body brought in dead –boldly written on it.

“That man did not die in our hospital,” he rejected the police's claims.

DCOP Ransford Moses Ninson would not comment on the latest finding, insisting he was yet to see the autopsy report.

The autopsy report noted that Sabado was a smoker and drunk alcohol at times which led to a creation of a tumour in his liver. Having had his scrotum and abdomen alleged stepped on repeatedly by the police, a clot of blood was found in the liver, the report said.

The death was also caused by shock and bruises he sustained as a result of the brutalities.

Meanwhile family members have been recounting the humiliating ordeal Sabado was subjected to.

The sister told Joy News her brother was severely beaten by the police to the extent that he had to defecate on himself whilst bleeding from his nose.

He was refused food and water by the police, she said, adding that the security personnel proceeded to a store that was managed by the deceased and ransacked the place too.