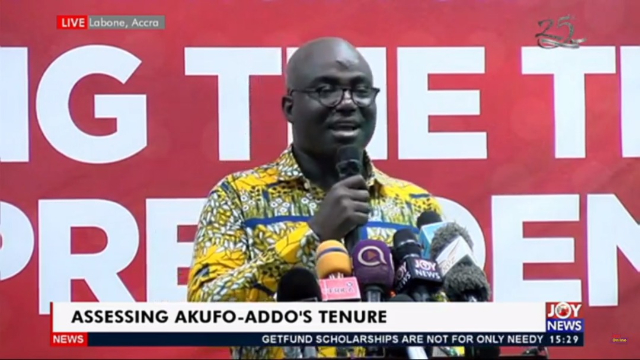 Ranking Member on Parliament’s Select Committee on Agriculture, Eric Opoku has accused the Akufo-Addo administration of collapsing the cocoa sector due to poor farming policies.

Speaking at the Coalition for Restoration (CFR) forum on “Assessing the three-year reign of President Akufo-Addo”, Mr Opoku said government’s ineffectiveness of implementing cocoa policies has affected livelihoods of cocoa farmers in the country.

“Annual production has continuously declined in the past two seasons thereby dwindling the incomes of our cocoa farmers.

Mr Opoku who doubles as a legislator for Asunafo South Constituency further noted that the results of cocoa production over the past two years exhibit the exact opposite of government’s claims of implementing initiatives to boost the cocoa production by 189%.

“In 2017, government recruited 10,000 youth for the artificial hand-pollination programme with the intention to increase cocoa production by 189%, however at the end of 2017, production did not increase but rather decreased by 12%,” he was categorical.

The MP, however, attributed the decline of low cocoa production over the years to government’s decision to erode initiatives of the National Democratic Congress (NDC) government under the Mahama government

He cited: “Under our [NDC] watch we gave cocoa farmers fertilizers for free because we wanted to improve the fertility of the soil as a means of increasing cocoa production. And this government [NPP] assumed office and the fertilizers that we have embossed ‘Not for sale’, they were selling it t cocoa farmers at a cost of GHâ‚µ80.00 and since farmers could not buy them, the fertilizers have been left to rot in the offices.”

Touching on the fisheries sector, he said due to utter neglection by government the industry has contracted, subjecting fisherfolks to emaciating hardships as a result.

He observed government’s little effort has also caused a rise in the importation of seafood into the country.

“The Akufo-Addo government has supervised the continuous contraction and decline of the fishery sector from positive growth of 3.1% handed down to them to negative growth for the past three years,” he said.