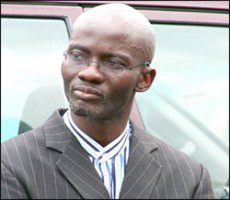 Presidential aide, Stan Dogbe has dismissed claims by the Executive Director of the Danquah Institute, Gabby Asare Otchere Darko that government is pushing for the passage of the $3 billion dollar loan from the China Development Bank because of some $30 million arrangement fees the facilitators of the loan stand to benefit if the loan is approved.

Parliament is expected to debate the controversial $3 billion China loan facility Friday after the Minority forced a revision of the loan report. The majority in Parliament on Thursday withdrew the initial controversial loan agreement and replaced it later in the day with an amended version.

But Gabby Otchere Darko is not enthused about the amended agreement before the House.

He told Joy News on Thursday that the amended agreement was not fundamentally different from the substantial one indicating that the only difference was that perhaps those who arranged for the loan were guaranteed $30 million once it was approved.

“Gabby was allowed on that platform to make some serious allegations about the loan facility including the fact that government is just pushing this facility because of an arrangement fee of 30 million dollars that some people are going to benefit from.

“Having read the document I think that Gabby’s statements are quite unfortunate and it also reflects the fact that people like Gabby only talk without reading. If he had read the document well, he would have been educated. He should read more” he said.

According to Stan Dogbe “the loan facility excites government tremendously because it fits perfectly into President Mills’ agenda for this country which is to transform the base of the country’s economy from one that depended on importation of raw materials and also move into a state of refining those raw materials in order to generate more for our country’’.

A Deputy Finance Minister, Seth Tekper, who was also on the show emphatically stated that on the matter of the $3 billion loan facility, government has been dealing directly with the China Development Bank hence there is no need to pay any individual or organization arrangement fees.

“Let me state categorically to Ghanaians that there is nowhere in the agreement that was presented to Parliament where there is an arrangement fee. Let me be very specific here, for both Tranche ‘A’ which is 1.5 billion and Tranche ‘B’ which is another 1.5 billion, which gives us the 3 billion, the 15 years and the 10 year period to repay, we have the same fees. And there are only two fees which are in the agreement presented to Parliament [a 0.25% upfront administrative fee payable to the bank and a commitment fee of 1% of any undrawn and committed amount].

“Unlike other loans where there are intermediaries, this one, government was negotiating directly with the China Development Bank both in Accra and in Beijing. It’s only when you have somebody arranging the loans that you pay an arrangement fee,” he explained.