COP26: ‘Moment of truth’ as world meets for climate summit 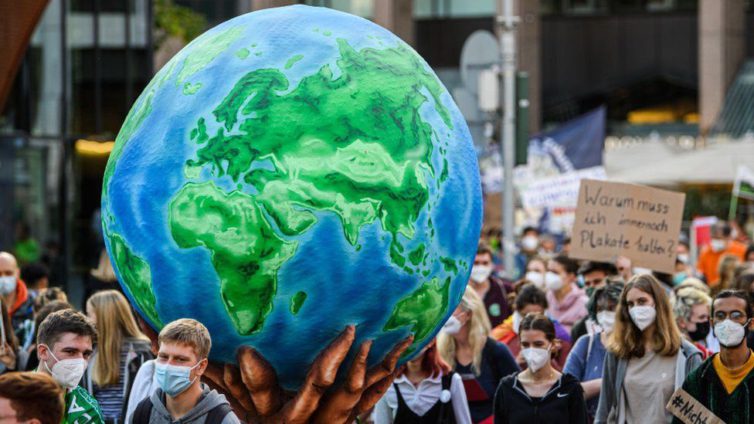 There have been protests to demand climate change action around the world in the lead up to COP26, such as this one in Dusseldorf, Germany

Delegates from about 200 countries will be there to announce how they will cut emissions by 2030 and help the planet.

With the world warming because of fossil fuel emissions caused by humans, scientists warn that urgent action is needed to avoid a climate catastrophe.

UK Prime Minister Boris Johnson said the summit will be the “world’s moment of truth”.

Speaking before the two-week conference, he urged leaders to make the most of it: “The question everyone is asking is whether we seize this moment or let it slip away.”

Day one will see a report on the state of the climate released by the World Meteorological Organization (WMO).

The WMO’s provisional report by climate scientists will compare global temperatures this year so far with previous years.

The past decade was the warmest on record, and governments agree urgent collective action is needed.

The United Nations gathering is one of the biggest summits the UK has ever hosted, and was delayed for a year because of the pandemic. COP stands for ‘conference of the parties’ and it is the 26th such conference.

Most of the leaders will arrive late on Sunday evening. Many are travelling from another summit, the G20, in Rome.

Sunday is largely a ceremonial opening day, with various speeches from people including Abdulla Shahid, the president of the UN General Assembly and Foreign Minister of the Maldives. The low-lying islands of the Maldives are threatened by climate change because of rising sea levels.

Countries from every region of the world will have representatives in Glasgow, ready to discuss their plans to cut emissions by 2030.

They all agreed in 2015 to make changes to keep global warming “well below” 2C above pre-industrial levels, but since then, as extreme weather events have intensified, climate scientists have urged nations to aim for 1.5C to limit the risk of environmental disaster.

At the G20 in Rome, a draft communiqué said that the leaders will pledge to take urgent steps to reach those goals. But already a key pledge to deliver $100bn (£73bn) a year in climate finance to developing countries has been pushed out to 2023.

Prince Charles will address the G20 summit later, telling world leaders they have “an overwhelming responsibility to generations yet unborn” at COP26, and saying he detects “a change in attitudes and the build-up of positive momentum” to take urgent action.

Host of the summit, the UK has set a target for all of the nation’s electricity to come from clean sources by 2035, and reduce its greenhouse-gas emissions to net zero by 2050. But some experts have said this is not achievable with the government’s current policies.

Scotland’s First Minister Nicola Sturgeon met with indigenous people from the Americas in Glasgow on Saturday, and said the Scottish government would “do everything and anything we can” to help poorer nations and communities that are more vulnerable to the effects of climate change.

The heads of state will be joined by some of the world’s leading climate activists, including Sir David Attenborough and Greta Thunberg – who was mobbed as she arrived on a “climate train” on Saturday evening.

The specially chartered train, which arrived from Amsterdam, also had on board some 500 passengers including delegates from the Netherlands, Belgium, Italy and Germany, as well as 150 youth activists and members of the European Parliament.

Many participants and activists are taking the train to Glasgow as it is a more sustainable way to travel than flying.