COP26: Boris Johnson calls on nations to pull out the stops as he returns to summit - MyJoyOnline.com

COP26: Boris Johnson calls on nations to pull out the stops as he returns to summit 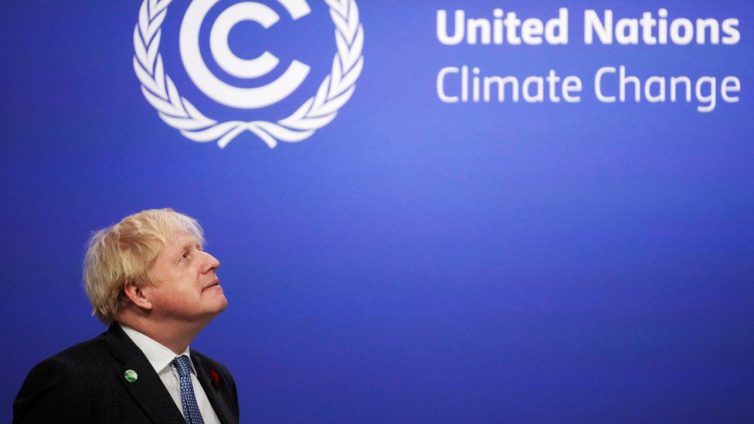 Prime Minister Boris Johnson is returning to the COP26 climate summit in Glasgow – urging nations to “pull out all the stops” to limit warming.

The first draft of an agreement setting out how countries will cut emissions to avoid temperature rises of above 1.5C is due to be published later.

The agreement – known as a “cover decision” – is the negotiated outcome of the COP26 talks.

Mr Johnson said negotiators would be working to “turn promises into action”.

Despite the promises made at the summit so far, the planet is still heading for 2.4C of warming above pre-industrial levels, according to a report by Climate Action Tracker.

A global average temperature rise of just 2C could mean a billion people are affected by fatal heat and humidity, the Met Office has warned.

Scientists say the world needs to limit warming to 1.5C above pre-industrial times to avoid the most dangerous impacts of climate change.

Ahead of his return to the summit, Mr Johnson said: “Negotiating teams are doing the hard yards in these final days of COP26 to turn promises into action on climate change. There’s still much to do.”

The prime minister said he would be meeting ministers and negotiators to hear about the progress made and where gaps must be bridged.

“This is bigger than any one country and it is time for nations to put aside differences and come together for our planet and our people,” he said.

“We need to pull out all the stops if we’re going to keep 1.5C within our grasp.”

A coalition of nations which are vulnerable to climate change, along with the US and European nations, is pressing for countries to submit action plans in the next year in line with limiting warming to 1.5C, and by 2023 to produce their long-term plans to meet the target.

What has been agreed so far at COP26?

The summit is still negotiating a deal that all 197 countries will agree on. But a series of side deals were announced last week:

With Wednesday named as transport day at COP26, the UK announced that new heavy goods vehicles sold from 2040 will need to have zero emissions.

Thirty countries have agreed to work together to increase the use of zero emissions vehicles, while plans for “green shipping corridors” to help a shift towards zero-emissions vessels are also due to be unveiled.

Another 14 states which are responsible for more than 40% of global aviation emissions have committed to a new decarbonisation target.

But the UK’s Transport Secretary Grant Shapps said travel, including flying, should be “guilt-free” and said the government did not see aviation as “the ultimate evil”.

He told the Daily Telegraph that changes to how we live our lives should not mean “the inability to go and visit you friends and family and do business”.

Attendees at COP26, including the prime minister, have faced criticism for using planes for short journeys to and from the conference.