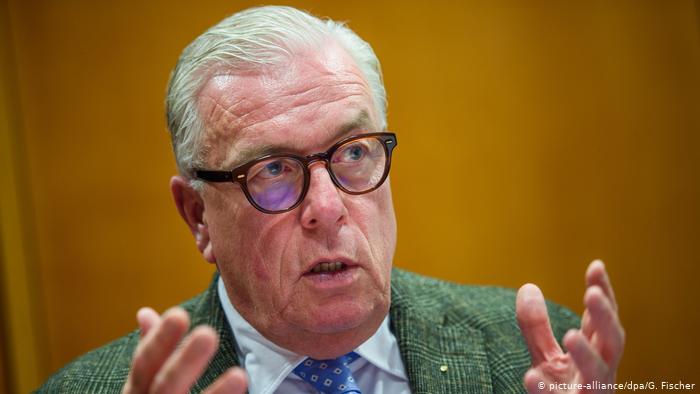 The head of Germany’s peak medical body said he wasn’t convinced that wearing non-medical cloth masks outdoors could combat coronavirus infection. His comments drew harsh criticism, and even a call for him to quit.

German Medical Association president Klaus Reinhardt has been forced to clarify his position on mask-wearing after his claim that there was no “scientific evidence they are actually helpful” sparked an outcry from politicians and doctors.

Reinhardt told a TV talk show on public broadcaster ZDF that he had doubts wearing simple non-medical masks outdoors was effective against the coronavirus. Such face coverings, he said, offered “no protection at all” to those wearing them, and only “very little protection against infecting others.”

A sharp rise in coronavirus cases across Germany in recent weeks has led to stricter rules in many cities, including mask-wearing orders in some crowded streets and pedestrian zones. For the most part, German rules on mask-wearing apply to enclosed spaces like shops and public transport.

The response to Reinhardt’s comments was swift, with one MP even calling for his resignation.

Sending mixed messages to the public

Interior Minister Horst Seehofer said Friday he found the remarks “from the highest authority in the medical profession” to be “almost shocking.”

Susanna Johna, Chair of the Doctors’ Union Marburger Bund, said that at a time when it was crucial to give the public clear messages, Reinhardt had created the impression “that everyday masks to protect against infection with coronavirus are of little value.”

“This personal opinion of the president of the German Medical Association contradicts current studies and is likely to discredit the evidence-based approach for minimizing infections that has been in place for months,” she said. Johna also stressed that both cloth masks and surgical masks helped protect everyone — but that they should be used in tandem with good hygiene, proper ventilation and social distancing.

The Health Policy Spokesman for the Center-left Social Democrats, Karl Lauterbach, who is himself a physician, said Reinhardt should withdraw his comments or resign.

“The President of the Medical Association cannot publicly declare that the position of the leading professional associations of the German medical profession and the current studies are wrong,” he said. “As a public official, he’s harming the work of his colleagues.”

While Reinhardt acknowledged that masks served a purpose in areas where social distancing wasn’t possible, such as on public transport, he told ZDF that orders to wear them outdoors would be “nonsense.”

He also referred to German anti-terror legislation that bars people from covering their faces in open-air public areas for security reasons. “And now we have a ‘mask order’,” he said. “It does something to a society, and I find it sensible and reasonable to think about it.”

The Medical Association Chief emphasized, however, that he did not want to be “a figurehead for opponents of masks.”

Reinhardt later clarified his comments in a joint statement with his association’s board: “Although [a mask] is not a reliable protection against one’s own infection, it helps to protect others by mechanically reducing the aerosol spread,” the statement said.

WHO says masks a ‘key measure’

While nobody asserts masks offer complete protection, consensus leans towards them at least helping somewhat. Germany’s top disease control agency, the Robert Koch Institute, recommends wearing a mask in certain situations to slow the spread of infection and to better protect risk groups.

The World Health Organization also describes masks as a “key measure to suppress transmission and save lives,” when used in combination with social distancing, hand washing and other practices.

This guidance was backed by a Japanese study released this week that found that masks offered significant protection from airborne coronavirus particles. However, the researchers also stressed that even professional-grade coverings cannot eliminate the risk of infection entirely.

Scientists at the University of Tokyo carried out a series of experiments using different types of masks fitted to mannequins that simulated human breathing.

They concluded that a cotton mask could stop up to 40% of particles being inhaled, while a N95 surgical mask blocked up to 90% of particles. Conversely, cotton and surgical masks caught more than 50% of the virus transmission from the wearer.

DISCLAIMER: The Views, Comments, Opinions, Contributions and Statements made by Readers and Contributors on this platform do not necessarily represent the views or policy of Multimedia Group Limited.
Tags:
Coronavirus
German
German Doctor