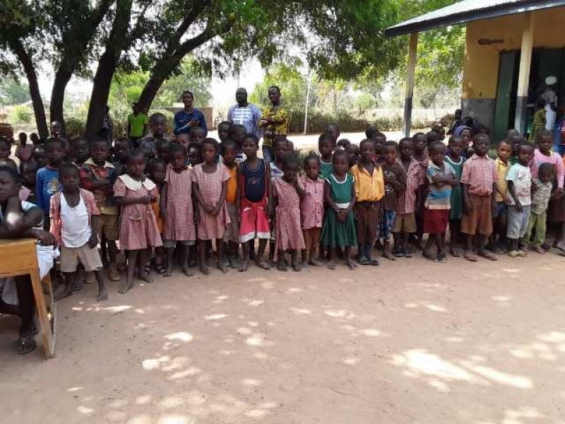 A total of 22,519 Kindergarten (KG), Primary and Junior High School (JHS) students in the Upper West Region have failed to return to school as of May, 2021 after the shutdown in March, 2020, due to Covid-19.

Madam Janet Kpan, the Regional Girls’ Education Officer in an interview with the Ghana News Agency (GNA) in Wa, under the “Mobilizing for Fighting Covid-19 project, being implemented by the Journalists for Human Rights in collaboration with the Ghana Journalists Association (GJA)”.

She said only the Sissala West District recorded an increase in enrolment at the KG level from 4,423 as at March, 2020 to 4,708 students as at May, 2021, adding that Nandom Municipality also had all of its 3,227 students returning to school without any dropouts.

Still, at the KG level, she said Wa Municipality had the highest number of 934 students not returning to school and this is closely followed by the Nadowli-Kaleo District which had a total of 839 students failing to return after the shutdown.

However, at the Primary level, Sissala East Municipality, made an enrolment gain of 1,031 students followed by Sissala West District with 348 and Wa West also recording a gain of 254 students whilst Nandom Municipality again maintained all its students in school.

Jirapa Municipality recorded the highest number of 1,251 students not returning to school at the Primary level followed by Lawra Municipality which also recorded a total of 1,238 of non-returnees.

Here, Wa Municipality increased its enrolment by 534 followed by Sissala West District with an increase of 19 students, whereas Nandom Municipality again recorded no increase and no absentees.

The Regional Girls Education Officer further disclosed that as at May, 2021, a total of 85 of the pregnant girls returned to school after childbirth out of which three were in Primary Four, five in Primary Five, another five in Primary Six, 13 in JHS1, 24 in JHS2, and 39 in JHS3.

Madam Kpan noted that but for the “Back-To-School Campaign” initiative by the Ghana Education Service (GES) the case of students failing to return to school would have been worse.

According to her, the campaign adopted strategies including community sensitization durbars; radio discussions; training of teachers on how to provide adequate health and emotional support for children in school; and provision of Personal Protective Equipment (PPE) across all schools to enable students to observe the Covid-19 protocols.

Others are; the use of successful females as role models, regular visits and interaction by officers with pupils, guidance and counselling on further education and other career pathways, and provision of the necessary support to students as and when needed.

On key issues that affected the return of children to school across the region, Madam Kpan identified stigmatization, lack of cooperation from parents, illegal small-scale mining, popularly known as galamsey, pregnancy, some students getting married, and some abandoning school to engage in driving the commercial motor taxi cab business.

The rest are stigmatization from colleagues, lack of parental support, and in the case of those pregnant, a caretaker for the child to enable the mother return to school.

The Regional Girls’ Education Officer noted that some measures, including ensuring punctuality among teachers, teaching children healthy lifestyles, including observing the protocols, listening to children concerns both at school and at home among others, were taken to ensure that children already in school, continue their education devoid of absenteeism/dropout.

Meanwhile, in June, 2021, Dr Richard Wodah-Seme, the Acting Upper West Regional Director of Public Health, reported that a total of 58 students from 17 schools across the region, have so far contracted Covid-19 since its outbreak in Ghana on March 12, 2020.

He lauded the collaboration between the Ghana Health Service (GHS) and the GES, which enabled them to control any further spread of the disease among their colleagues.

Meanwhile, the Upper West Region currently has a total number of 607 confirmed cases, 73 active cases, and 20 deaths with Wa and Nandom Municipalities, contributing more to the total number of cases.