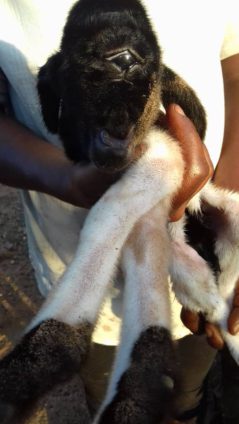 A 25-year-old farmer was astounded when his sheep birthed a mutant lamb with just one eye and a strange human-like face.

Aside missing an eye, the black and white lamb appeared to have no nostrils.

Clement Seidu, said the deformed lamb was born alongside one healthy one at his farm at Hwidiem-Agya Acquah in Asante Akim North Municipality of the Ashanti region.

“I have never seen anything like this before. My sheep gave birth to two lambs. One of the lambs had no nostrils. I was scared. The animal’s head was like a human head, ” he told JoyNews correspondent, Mahmud Mohammed-Nurudeen.

According to Clement Seidu, he purchased the all-white Ewe in Sunyani in the Bono Region.

He narrated how the new born mutant lamb faced difficulties with breathing.

“The lamb had trouble breathing due to its missing nostrils. Because it had no upper lip and nostrils, it couldn’t feed milk from its mother.”

As a result, the one-eyed wonder lamb, he said passed away during the night.

According to a retired veterinarian, who attended to the farmer, these situations can occur when the sheep breeds with a single ram from the same herd.

Mr. Roland Attenang said, “the cause is probably due to in-breeding (that is mating between close relations within the flock.)”

“To avoid such incidents, rams from other herds must be obtained every two years,” he added.

In Turkey, a sheep in 2010 reportedly gave birth to a lamb with a human-like face.

In September 2019, a nanny goat from Zimbabwe birthed a kid with similar features. It lived for several hours until frightened village residents killed it.

Also, in January 2020, a mutant goat was worshipped in Rajasthan state in India after being born with a strange human face.

The flat-faced goat was thought to be an omen by villagers of Nimodia.

Experts suggest animals with such cases could have suffered from a rare congenital defect known as cyclopia, in which genes that under normal circumstances create facial symmetry fail.